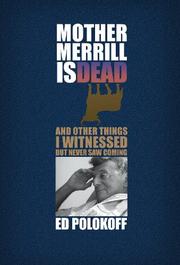 There is something for everyone in this collection of memoir snapshots. Heck, there is even a novella for good measure.

Debut memoirist Polokoff has lived a full life that’s not over yet. The man appears to have enormous energy even now in his late 80s. After starting out as an academic economist, he spent a long and successful career with the investment giant Merrill Lynch and also shouldered—graciously, happily—a ton of civic responsibilities in Buffalo, where he lived while working at the investment company (Florida seems to have been a second residence). He married twice and had three successful children. The first marriage ended in an amicable divorce; his second wife, Gina, continues to be his muse. He was a Navy lieutenant who saw action on a Landing Ship Tank in the Pacific theater in World War II. He is a pretty fair jazz pianist and a lifelong golfer. Topics covered, usually with four or five entries apiece, include his early life, his college days at Duke, his travels, his wartime experiences, his years and his friends at Merrill Lynch, and sections that are harder to describe, whimsical catchalls. But some section titles do give us their flavors: “Turning Points,” “Musings,” “Fascinating People,” and so forth. The novella is earnest, but fiction is not the man’s long suit: “Alex and Max” strikes one as a male sexual fantasy dressed as a morality tale. A memoir is only as engaging as its memoirist, and it’s almost impossible not to like Ed Polokoff. (How can you not like a man who dedicates his book to “Gloria and Gina, the two wives in my life”?) Polokoff is a shrewd judge of character, but sometimes his affection for others may skew his perspective. He is an enormously successful man who came from humble beginnings, but one never (with apologies to Chevy Chase) gets the sense that “I’m Ed Polokoff and you’re not.” Instead, he comes across as a real mensch who is grateful for the good life he has had. Personal photos are included: black and white and grainy, but perhaps that adds to their charm.

Polokoff writes well, and for that—and his engaging humanity—the collection is to be recommended.