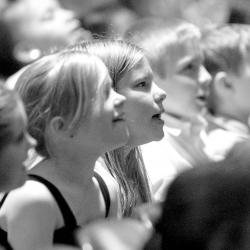 Last week, the Buffalo Philharmonic Orchestra and students in the Amherst School District came together to participate in a music education program called Link Up.

Julie Furlong, the choral director at Smallwood Elementary, said the Link Up program was developed by Carnegie Hall and is interactive between professional orchestras and students.

“It’s truly an extension of what we do in the classroom, giving a real-life model of professional musicians so the students can engage with the music.”

According to Furlong, the BPO played the instrumentals while students at Smallwood and Windermere Elementary, in grades three through five, took part by playing recorders and singing. The Amherst High School Varsity Singers and Sweet Sixteens joined the BPO onstage to lead the vocals.

Furlong says the younger students began preparing for the repertoire and learning the recorder parts in September. Students also gained knowledge about the composers.

“They get to listen to the music and hear it live with a professional orchestra. It’s just an excellent experience for them.”

Robin Parkinson said the elementary aged students sat in the audience and were able to follow along as the music and lyrics were projected on a screen above the orchestra.

Parkinson is the Buffalo Philharmonic Orchestra’s director of education and community engagement. She says the first Link Up program took place in the 2010-11 season.

This year’s Link Up program was held at Amherst Middle School, located at 55 Kings Highway. The pieces that were performed include Aaron Copland’s “I Bought Me a Cat”; Antonin Dvorak’s “New World Symphony”; Beethoven’s “Ode to Joy”; “Simple Gifts,” a Shaker hymn; and the Spanish ballad “Oye.”

According to a prepared statement, a resident composer of Carnegie Hall’s Weill Music Institute develops vocal and recorder parts for orchestral repertoire and writes original music for the program.

The commissioned pieces were “Come to Play” and “To Make Words Sing,” which is based on a poem by poet Langston Hughes.

According to Furlong, “To Make Words Sing” has a funky beat and there’s sort of a dream sequence, representing Hughes’ vision.

She said working together as an ensemble allowed students to learn something new in addition to experiencing the process of discipline.

“Instead of just being a passive audience, they’re actually singing and playing parts of repertoire, so it’s a powerful connection,” she said.

Furlong and Parkinson both traveled to Carnegie Hall to become trained in the program.

Parkinson noted that the students are always enthusiastic and prepared. The performance is also held in the evening so parents are able to attend and see the culmination.

“Every time we do this, it’s so fantastic to hear the kids singing and playing along,” she said