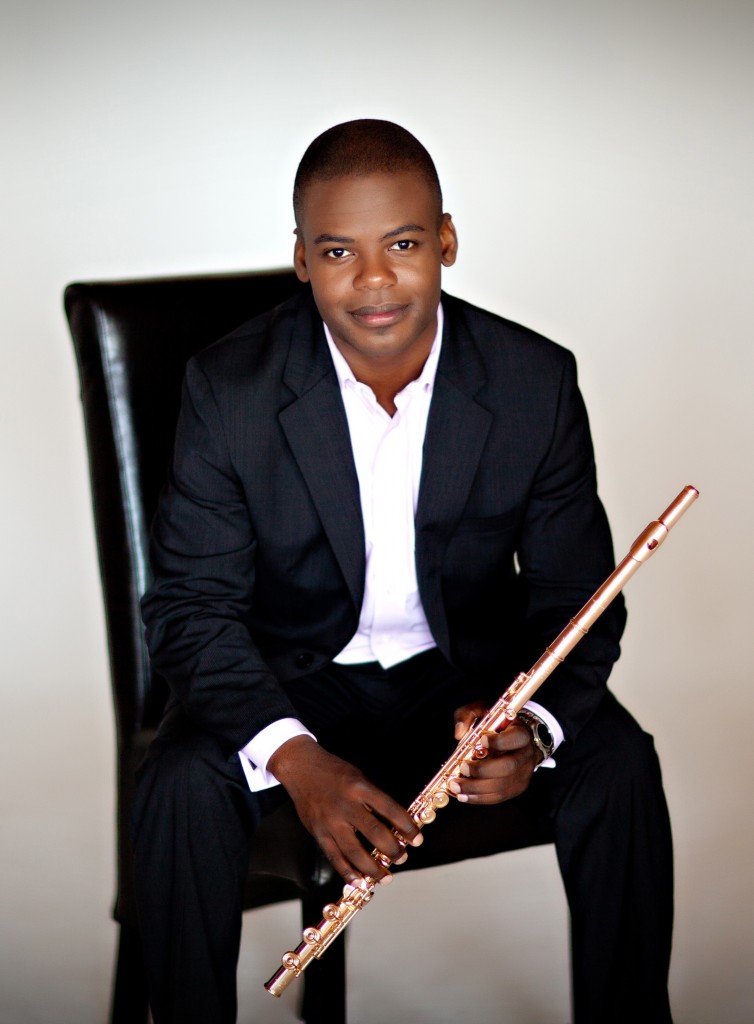 The visit by the flutist who will be performing with the Buffalo Philharmonic Orchestra this weekend was the latest initiative of a role model program presented by Communities of Giving Legacy Initiative. The program, “Success Looks Like Me,” provides low-income youth of color with opportunities to interact with successful adults.

McGill described their parents as former art teachers who were “creative people.”

“My father played an African wooden flute. My uncle played bongos,” McGill told his young audience. “My mother would sing. My mother eventually bought my father a used silver-plated flute and some instruction booklets.”

McGill was 7 when he found the flute collecting dust in his parents’ closet. As a youth, he recalled moments of passion when he found music he loved and he couldn’t stop practicing it.

At age 13, he attended summer camp at Interlochen Center for the Arts in Michigan. It was at Interlochen where he recalled a rival named Ira who won out as the camp orchestra’s first chair flute.

“I was so mad, so frustrated so I walked back to the cabins where we lived, and as I was walking I took my flute out of the case and slammed the case down. I started to practice as I never practiced before,” McGill said. “I continued practicing until the end of summer when I went back to Chicago.”

After McGill finished speaking, the music students peppered him with questions.

Matthew Wilson, an aspiring musician, asked where to look for opportunities.

“Start with yourself,” answered McGill. “Be the best musician you can be, and you can start working on that today. Surround yourself with good people, and you’ll find even more opportunities.”

Ayana Bardon wanted to know if McGill played any other instruments.

“When I was 14 in high school, I wanted to play the saxophone, and I did for several months,” McGill said. “There’s nothing wrong with playing a variety of instruments. I guess I just thought the flute was my passion.”

“Success Looks Like Me” was introduced in spring 2012 with Ruben Santiago-Hudson, a Lackawanna native, writer and Tony Award-winning actor. In November 2014, international violinist Tai Murray participated in the program. Murray now lives in Berlin.

Through the program, local and national leaders of color interact with youth through in-person and online mentoring sessions, panel and group discussions, visits to college campuses and workplace tours. The goal is to inspire youth to believe that they can achieve greatness, according to Jennifer J. Parker, founder of the Black Capital Network and an advocate for the Communities of Giving Legacy Initiative.

McGill received his bachelor’s degree in Flute Performance from the Curtis Institute of Music in Philadelphia. He received his master’s degree from Juilliard School in New York City. He has performed on Public Broadcasting Service’s “Live From Lincoln Center,” A&E’s “The Gifted Ones” and NBC’s “Today” and “Nightly News.” As a teenager, he appeared on “Mister Rogers’ Neighborhood.”

McGill is the winner of the Avery Fisher Career Grant administered by Lincoln Center for the Performing Arts. Artists do not apply directly for the award and have no idea they are even under consideration. The musicians, who must be U.S. citizens or permanent U.S. residents, receive these awards based on excellence alone.

McGill will perform as part of the BPO’s annual Wolfgang Amadeus Mozart birthday celebration at Kleinhans Music Hall. He will be joined by harpist Yolanda Kondonassis for two performances over the weekend. The first will be at 8 p.m. Saturday; the second, at 2:30 p.m. Sunday.

He also will lead a master class from 7 to 8:30 p.m. Friday in the Mary Seaton Room at Kleinhans.