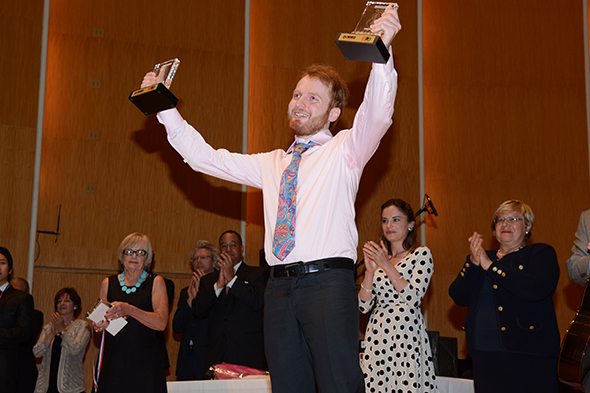 Music director JoAnn Falletta, in her only local appearance this summer, will be on the podium to lead the Buffalo Philharmonic Orchestra on Monday July 20 at 7:30pm when the BPO makes its debut on the main stage of the Shaw Festival Theatre in Niagara-on-the-Lake. The concert, which will feature Ukrainian guitarist Marko Topchii, winner of the 2014 JoAnn Falletta International Guitar Concerto Competition as soloist, is being presented as part of Music Niagara’s 17th season.

“I discovered the Shaw Festival about ten years ago,” says Falletta, “and I’ve fallen in love with it; we try and see two or three plays every season.” Falletta, as might be expected, has a very busy summer schedule. When reached by phone, she was at the nationally renowned Interlochen Center for the Arts in northern Michigan, in the midst of a two week long residency coaching the selected high school musicians who make up the World Youth Symphony Orchestra, the first and still the most highly regarded internationally performing youth orchestra in the country. The position is highly coveted by professional conductors, as evidenced by the fact that Falletta is being succeeded by Andreas Delfs, former music director of the St. Paul Chamber Orchestra and conductor laureate of the Milwaukee Symphony. Later in the summer, Falletta will be conducting the Helsingborg Symphony in Sweden, the Orquesta Sinfonica Nacional of Peru and the Orquesta Sinfonica Nacional of Columbia.

“I often thought that it would be wonderful for the BPO to play a concert in the Shaw Festival Theatre during the summer season, perhaps on a Monday when the stages are dark. When Attis Bankas, the founder and music director of Music Niagara invited us to perform a program this season I thought that it would be the perfect opportunity to showcase the return of Marko Topchii, the winner of last year’s guitar competition, as a soloist with the orchestra.” Topchii won the competition last year by playing Heitor Villa-Lobos’ Concerto for Guitar and Small Orchestra, a work premiered by the great Andre Segovia and the Houston Symphony under the baton of the composer himself in1956. Topchii was also the top vote getter last year in both the Audience Award and the BPO Musicians Award competitions, becoming the only competitor to win all three prizes since Polish guitarist Marcin Dylla in the inaugural 2004 competition.

Topchii has been very busy since winning the Falletta competition, literally crisscrossing the globe to win first place in the Changsha International Guitar Competition in China and first place and the audience prize at the Taiwan International Guitar Festival last summer. He also won first place, in the Concorso Internazionale di chitarra classica Ruggero Chiesa in Italy in September and first place at the Jakarta International Guitar Festival in Indonesia last November. This spring, Topchii won first place and the audience award at the Concours de Guiitare en Pay Taranais in Albi, France and first place at the International Gredos San Diego Classical Guitar Competition on May 14 in Madrid. On May 24, Topchii performed with the German Radio Philharmonic Orchestra in Ratheim, Germany, and the very next day he made his Carnegie Hall recital debut. In a follow-up article after last year’s competition, this column predicted that “based on his win last Saturday, Marko has earned the right to be positive about his future chances.” Now, it is definitely safe to say that Marko Topchii is well on the way to an outstanding international career.

Topchii’s solo appearance with the BPO for this concert is one of the prizes he earned for being the first place winner in last year’s Falletta competition, and as per tradition, he will perform Rodrigo’s ever-popular Concierto de Aranjuez, the touchstone of the 20th century guitar concerto repertoire. JoAnn Falletta has demonstrated a remarkable ability to assemble symphonic programs very well suited to any occasion, and this concert’s program is very much in that mode. “I wanted to program the kind of music that Shaw Festival play-goers might want to hear on a summer evening, on a night when the theatres are dark,” says Falletta. No one would argue with her selection of Rossini’s irresistible The Barber of Seville Overture to open the program, and adding Mozart’s joyful Symphony No. 38 in D major, “Prague” will showcase the talents of the BPO’s superbly gifted wind players.

As another inducement to attend this event, Music Niagara’s founder and director Atis Bankas will be the featured violin soloist in two works by Tchaikovsky for violin and orchestra, one of which, surprisingly, has never before been performed by the BPO. Having heard a performance of Lalo’s colorful Symphonie Espagnole, Tchaikovsky was inspired to write a violin concerto, but he was dissatisfied with his original slow movement, which he called Meditation, and he later discarded it in favor of the Canzonetta of the finished Concerto. The original slow movement, now known as the Souvenir d’un lieu cher for Violin and Piano, Op. 42 was used by the composer in a set of three violin and piano pieces that he composed in appreciation of his longtime patron Mme. von Meck’s hospitality. Bankas, who teaches a large violin studio at the Glenn Gould School of the Royal Conservatory in Toronto and is a first violinist with the Toronto Symphony Orchestra, will also be featured as the soloist in Tchaikovsky’s Valse-Scherzo, Op. 34, composed in 1877 for the composer’s former student, Iosif Kotek.