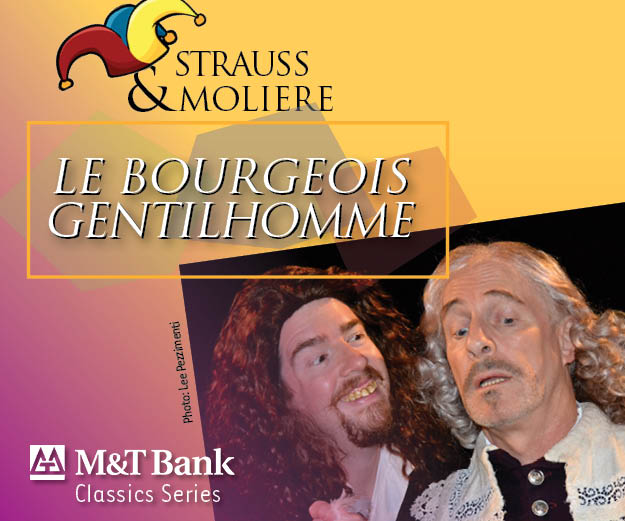 “Le Bourgeois Gentilhomme” means “The Middle-Class Gentleman.” The playwright Moliere wrote the broad comedy in 1670 as a private entertainment at the court of the Sun King, Louis XIV. It was performed with music by the French Baroque master Jean-Baptiste Lully.

The farce, a bonbon for the French nobility, skewered a doltish nouveau-riche merchant who dares to presume to try to become an aristocrat. He hires a dancing master, a fencing master, a tailor and other experts to give him polish, with pathetic and hilarious results. The odds are good that the Sun King danced in the production – perhaps as the fencing master, perhaps as the tailor. He loved ballet and danced a lot of roles early in his reign, when this play was written.

Colorful as that occasion must have been, the performance taking place at Kleinhans Music Hall this weekend is reaching back in history to give it a run for its money.

The Irish Classical Theatre is joining the Buffalo Philharmonic Orchestra and LehrerDance for an updated look at “Le Bourgeois Gentilhomme,” with incidental music written for the comedy in the early 20th century by Richard Strauss.

Vincent O’Neill plays Monsieur Jourdain, the hapless would-be nobleman. Jon Lehrer, the head of LehrerDance, choreographed the dances. Like Strauss’ score, they have hints of the Baroque.

BPO Music Director JoAnn Falletta is conducting the music, which will be recorded for Naxos. Strauss’ ravishing score is very near to her heart.

“That’s exactly the right word: ravishing,” Falletta said. “It is ravishing music. I think he softens this play. It’s very satirical – he does make fun of Jourdain – but the music creates a world of gentleness and tenderness as well.

Written for a small orchestra, the music is challenging because it is so transparent. Falletta jokes that before a recent Rachmaninoff concert, one spectator said that one would have thought the Strauss was on the program, so many musicians were practicing parts of it.

Adding to the excitement, the concertmaster from the Cleveland Orchestra, William Preucil, is coming in to serve as concertmaster for the occasion. The BPO is still seeking a permanent concertmaster, and Preucil asked if, for the Strauss, he could do the honors.

Falletta said they were chatting about the concertmaster search when the subject came up. “I happened to say, ‘We’ve got a real tour de force coming up. I’ve got to find someone for that.’ There was this silence, and then he said, ‘Well, would you let me come and do it?’ Everyone’s looking forward to him. He’s a truly great violinist, from one of the greatest orchestras, and he’s very lovable, funny and humorous.”

The music might be beautiful and sympathetic, but it is also witty. Strauss, in a minuet, suggests Monsieur Jourdain’s clumsiness with thumping, irregular rhythms. In the fencing scene, you can feel the chaos as the bourgeois gentleman stabs the sword every which way.

Jon Lehrer, as he choreographs that chaos, laughs freely at the poor upstart.

Like the 17th century courtiers, the audience should go to the show expecting to laugh.

“It was the Sun King’s favorite piece of all,” says Vincent O’Neill. “It wasn’t the deepest of Moliere’s pieces. It’s unashamed spectacular entertainment. It’s a delightful cream puff.

“The aristocrats of that era in France were eager to skewer the noveau riches. Aristocrats rejoiced that the upstarts could not dream of being one of them.”

O’Neill said he relishes the chance to play the upstart Monsieur Jourdain.

“As an actor I’m perceived as a serious person, I’m always cast in roles of great authority. It’s great to play the other end of the keyboard, where I’m usually not found,” he said.

“Lully’s music has a much more staid classical feel to it,” he reflects. “Strauss’ music is very tongue-in-cheek. It has an amazing range. Each piece is totally different. It is absolutely in keeping with the whole kind of nuanced, slightly satirical, sent-up nature of Moliere’s piece.”

“They’re in my head. I’m not abandoning them,” Lehrer said. “But we put our spin and our stamp on it. I said if you’re looking for someone to come in and do court dances, don’t hire us. We’re going to do something unique and fun and striving.

“When you’re collaborating like this, you’re trying to create something new.”

Which “Le Bourgeois Gentilhomme” is, after all these centuries. The comedy written for the Sun King still shines, Falletta observes.

“People always want to be accepted by people who aren’t accepting them,” she said. “This merchant, he’s made a lot of money, but he doesn’t fit in. His daughter is in love with someone from his own social circle, and he wants her to marry someone far above her. … It’s funny and sad at the same time.

“People do not change. I think that connection to human nature is what brings us all together. It’s what makes music speak to us, whether it’s Lully or Strauss or John Adams.”