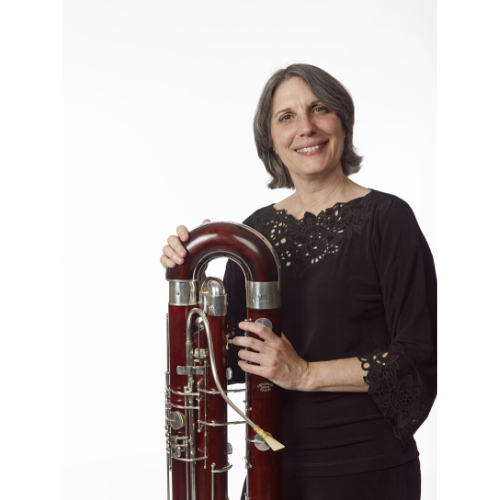 But Martha Malkiewicz has no idea why anyone wanted to take her contrabassoon. It’s a woodwind that is twice the size of, and produces a lower sound than, a bassoon, with 16 feet of tubing curved around on itself into a 5-foot-long instrument.

Malkiewicz, who plays the contrabassoon for the Buffalo Philharmonic Orchestra, leaves the instrument at Kleinhans Music Hall when she’s not using it to practice or perform.

The 25-pound instrument – it weighs 50 pounds when it’s in its case – went missing while the orchestra was on a weeklong break.

Malkiewicz alerted a national and international community of musicians, local music and pawn shops and Buffalo Police of the likely theft, which she discovered Wednesday.

Her instrument is 32 years old and worth $36,000. But Malkiewicz doesn’t believe whoever took it knew the value of the contrabassoon – or, for that matter, even what it was.

Instead, she believes it was a crime of opportunity, and one that is unlikely to lead to a big payoff.

Now, she is enlisting the public’s help in seeking the contrabassoon’s safe return.

“You can imagine my amazement that someone would take it,” Malkiewicz said in an interview several hours before playing in Saturday night’s orchestra concert with a contrabassoon borrowed from a friend. “I’m sorry, but this is not your normal thing to even consider taking. But somebody did. I’m still blown away by it.”

Malkiewicz, who is from the Town of Tonawanda, went to Indiana University and studied in Vienna before earning masters’ degrees at the Eastman School of Music in Rochester.

She has performed with the Buffalo Philharmonic Orchestra since 1984 and she bought her contrabassoon right after getting the job for $7,000. It was made by Mollenhauer-Lindsay, a German maker of musical instruments, and has the serial number 723.

Only one person in an orchestra plays the contrabassoon, also known as a double bassoon, which makes a low sound comparable to a tuba.

“It’s the grandfather of the bassoon,” with its larger size and a sound that is an octave lower than a bassoon, said Malkiewicz.

The reeds that Malkiewicz blows into it to produce the contrabassoon’s sound are larger than bassoon reeds, as well.

The instrument is so big and ungainly that Malkiewicz rarely ever takes it out of Kleinhans unless she needs it to perform somewhere else.

She leaves the contrabassoon in its case on top of a row of lockers in a hallway that is backstage at the concert hall. The musicians and Kleinhans staff are allowed back there, but the general public is not and security guards control access to the space.

The orchestra was off for a week late last month, and Malkiewicz left the contrabassoon in its usual spot. During that time, other groups were using the concert hall, but the standard security measures were in place, she said.

On March 26, Richard George, Kleinhans’ master property person, noticed that a stand Malkiewicz uses was on the floor in front of the lockers, and the contrabassoon case wasn’t on top of the lockers. But he assumed she was using the instrument and didn’t think anything of it.

Then, last Wednesday, Malkiewicz came in to practice with her contrabassoon, and didn’t find it in its usual spot. When she asked George about it, “He said, ‘I thought you had it. You don’t have it?’ And then he and I started a search.”

At first, Malkiewicz said she hoped it had just been moved and misplaced somewhere in the concert hall, but the contrabassoon didn’t turn up. George told her he had last seen it the morning of March 24.

Malkiewicz sent out word about its loss on Facebook and through her circle of musician friends, and reported it through an online link that reaches an international audience.

She said the BPO’s executive director, Dan Hart, and its music director, JoAnn Falletta, have sent notes of support.

She planned to use the borrowed contrabassoon for Saturday night’s and Sunday afternoon’s performances, but likely will rent one for future concerts.

She also has called music and pawn shops locally one by one to be on the lookout for the contrabassoon, though she doubts anyone trying to sell it will get very far.

“I think the people who take things like this don’t have much thought process to it. I think they go on instinct,” she said. “I have a feeling they may think they can fence it quickly, get a few bucks for it. This does not seem to me to be thoughtful theft.”

Malkiewicz said she reported it to Buffalo Police but hasn’t received a call back from officers. Police spokesman Michael J. DeGeorge said the incident is under investigation and authorities are following a few leads.

Malkiewicz said the instrument is insured but she still hopes to get it back. She is offering a reward for its safe return and asks anyone with information to email her at martmalk2@mac.com or to call Lisa Gallo at the orchestra at 885-0331, Ext. 302.

Her message to whoever took the instrument is, she said, “Turn it in. Take it to the police. Take it back to Kleinhans. I’m more concerned that they will trash it. And then the instrument will be gone for good. And that will be sad.”