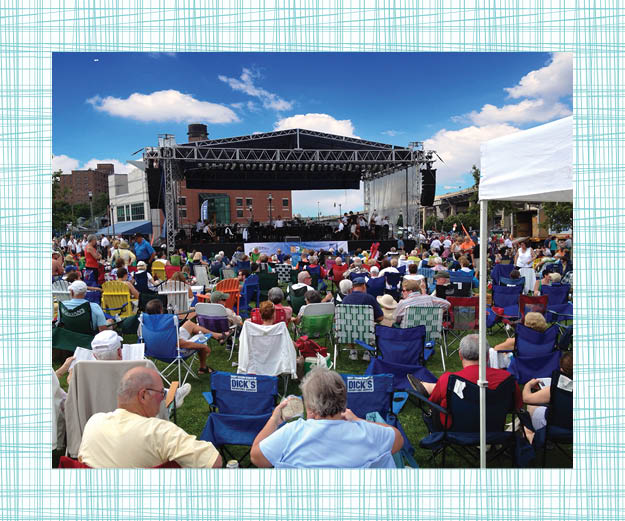 Civic pride and political expediency joined together Thursday, 7/16, with Mayor Byron W. Brown declaring it “Buffalove Day” at a news conference in his chambers. Several hours later, on the open-air Canalside Concert stage, there was another Buffa-centric convergence of a sonic sort.

The American singer, songwriter and living soul force has been on playlists and inspiring sexy dance moves since the early 1960s. His hottest recordings – “Songs in the Key of Life” and “Talking Book” – are both of 1970s vintage. The set lingered mostly there, wisely and happily.

Wonder’s hits from that era were when the artist meandered with ease from his soul and R&B roots to the coolest dance floor riffs of an emergent disco genre. The BPO, dressed in their summer whites and under the baton of Brad Thachuk (who created the evening’s orchestral arrangements) played on approximately half the evening’s songs, adding lush textures to the amplified musicians at the front of the stage.

“Superstition” was the wise and solid opener, with the sweetest interjections from the string section, before a slight gap of silence and then on to the most popular track from “Songs” – horn-drenched “Sir Duke.” Vocalist Preach Freedom, handsome in black suit, hat and shades, sang the classic lines paying homage to “musical pioneers.”

It was on to “Signed Sealed Delivered I’m Yours,” with Critt’s Juke Joint’s eponymous member and bandleader Eric Crittenden supplying sax blasts. He ended the tune by telling the thousands at Canalside, a diverse mix of happy dancers, “You guys are beautiful. Beautiful, beautiful people out there.” This was indeed a BuffaLove fest, this 7/16.

The female vocalists, Marla Harris (in summer sunset orange), Drea D’Nur (in summer popsicle purple) and on some songs, bassist Zuri Appleby (ever demure but of shining talent), were each divine. In addition to Crittenden and Preach Freedom, singer and guitarist Vinnie DeRosa was effusive and wavering at the outset, but settled into a fine Wonder groove in the second set.

“Ribbon in the Sky,” a ’90s Wonder song accompanied by BPO strings and sung by D’Nur, seemed timed for the setting sun. Everyone on stage was in a groove; at song’s end, Thachuk tossed his head back in ecstasy.

The set’s emotional high point was when members of the Buffalo Center for Arts and Technology HipHop Chorus joined everyone on stage. Crittenden, art director at BCAT, is their proud teacher. Dressed for the spotlighted occasion, they performed “Love’s in Need of Love Today” with the BPO strings, band and all vocalists at their respective mics. The song, a call for love, calls for an end to hate “before it’s gone too far.”

Crittenden explained that it’s his favorite Wonder song, a “timeless song that applies to every moment, situation or circumstance lacking love.”

As the beaming BCAT students left the stage, Crittenden shouted “Those are our kids.” “I Wish,” another absolute rouser from “Songs,” became an extended jam inspiring most of the audience to shake hips and savor all things soul.

Openers the Michael King Project, winners of a band battle for this illustrious slot, played a concise set of six tunes – two originals, one featuring a rare cowbell. Their well-chosen R&B classics were largely scooped up from the heyday era of Wonder and included a slo-mo version of the Jackson 5 hit “I Want You Back.”