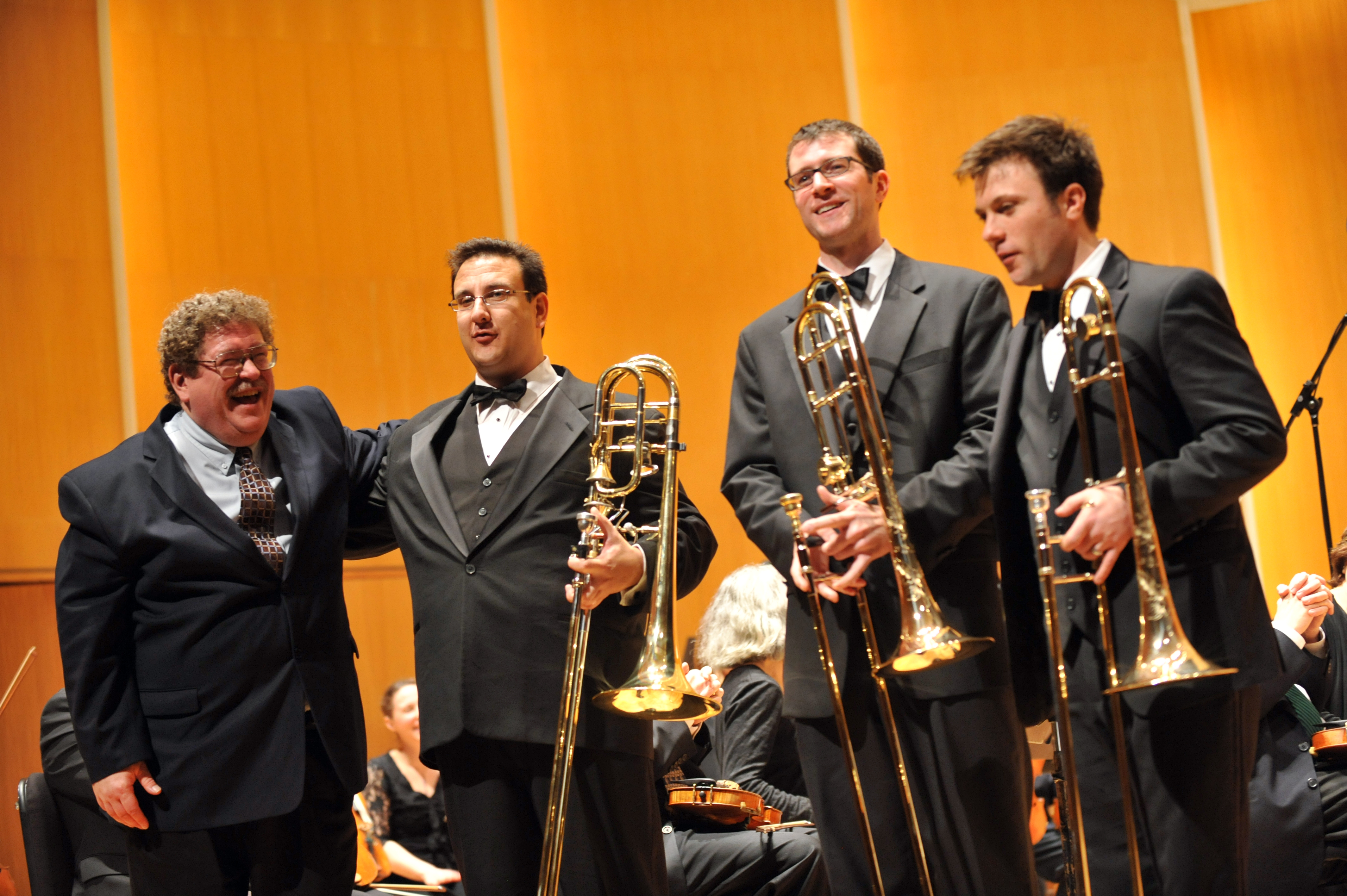 “We thought ‘Hey, wouldn’t it be fun to do something where you’re conducting and I was a soloist.’ And we kind of toyed around with different pieces and came up with this,” said Dee, a West Seneca resident. “That was several years ago.”

However, Dee’s suggestion never came to fruition. That is, until tonight.

“What’s meaningful for me is just that Stefan and I have been friends since he was at [The] Juilliard [School] prior to me, and when he left to join the Buffalo Philharmonic is when I took his spot that he opened at Juilliard. … We’ve been friends ever since then, and obviously now I’m sitting in the chair that he previously sat in, and now he’s conducting,” he said. “Not only just the history of us both being bass trombonists and having such a close relationship in the business, but that he’s a dear friend, so for me, that’s very meaningful, and also to solo in front of this orchestra that’s been my family since 2007.”

Dee said the piece he’s performing is somewhat out of the box for the BPO, which he said generally plays more romantic and modern styles of music.

“What I’m performing is one movement from his concerto for bass trombone and orchestra,” Dee said. “The piece is made up of elements of the ‘Twilight Zone’ TV show theme and some from the James Brown repertoire, so it’s got sort of a funk feel to it. It’s a real cool piece.”

Tonight’s free concert at Knox will be one of Dee’s last with the BPO, as he will take on a new set of musicians with the Pittsburgh Symphony Orchestra early this fall.

“The Pittsburgh Symphony Orchestra is a very, very fine orchestra. They perform 52 weeks a year, so they’re a full-time, full-year-round orchestra. Slightly larger in size [than the BPO], and they do a lot of touring, so every year they do some kind of tour to either Asia, South America or Europe,” he said, adding that he has done some touring and recording work with the orchestra in the past.

“It’s very similar to Buffalo in that the colleagues are very, very warm. You don’t always get an orchestra where everyone, for the most part, gets along. … I couldn’t be luckier.”

Though Dee said he is excited to get under way with the Pittsburgh Symphony Orchestra, he said he will miss Buffalo and his colleagues at the BPO.

“I’ve truly enjoyed my time in Buffalo, and I mean the move to Pittsburgh is definitely a move up and is recognized in the business as a move up … but I’ve really, just really, enjoyed Buffalo and my colleagues here,” he said. “This was definitely a place I was ready to call home for the rest of my career.”

The concert will start at 7 p.m. today on the grounds of the park, 437 Buffalo Road, East Aurora, with free parking located at the Neil and Barbara Chur Equestrian Center. In the case of inclement weather, the concert will be postponed to 7 p.m. Friday, July 8.