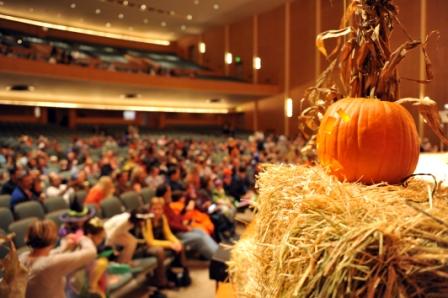 Halloween got an early start Sunday in Kleinhans Music Hall.

Hundreds of pint-sized princesses, witches, superheroes and skeletons paraded across the stage to the Funeral March of a Marionette, creating a festive ending to the Buffalo Philharmonic Orchestra’s hourlong “Symphonic Spooktacular.”

Some orchestra members also dressed in costume as they performed songs from John Williams and Elton John to Strauss and Tchaikovsky. Leading the way was Associate Conductor Stefan Sanders, outfitted as one of the dancing hippopotamuses from “Fantasia.”

The concert – the first of six BPO Kids events on Sunday afternoons – was intended to make classical music fun for children. It was also a BPO Kids for Exceptional Kids program, providing youngsters with autism a chance to act naturally without families fearing a disruption to others.

“We think it’s wonderful to expose the children to the BPO this early,” said Allison Gioia, who was with her husband, E.J. Flammer, daughter, Lily, 8, dressed as a princess, and Jack, 4, as Darth Vader.

Nearby, Iris Lawson, 5, dressed as a cat, was getting a crash-course on how to blow into a tuba at “the Instrument Zoo,” in which youngsters had a chance to make noise with symphonic instruments prior to the start of the concert.

“It’s a total blast,” said Anna Whistler, dressed up as a witch – “Anna Witchler today.” The Buffalo Suzuki Strings piano instructor was putting a tiny guitar in the hands of children as a cacophony of noise stirred all around her.

“I think the nature of the event always gets at the spirit of play and childhood, so we’re all in good spirits,” Whistler said.

For children with autism spectrum disorder, sound-muffling headphones, seats near exits and access to a quiet space for breaks were offered. Ushers, staff and volunteers were also instructed on communicating with autistic children. The program is supported by Women & Children’s Hospital, the BPO and Wegmans.

Heidi and Tyler Maloney of Lockport, with Declan, 7, who has autism, and Brixton, 4, were grateful for the program.

“It’s usually very hard for Declan to sit still and stay quiet, which is kind of expected in an event like this. This is so much more open and kid-friendly,” Heidi Maloney said.

She said families like hers find it difficult to attend community events.

“You’re very afraid to go to things like this because you don’t want to spend the money if you don’t think they can actually sit through it,” Maloney said. “You also don’t want to be judged if they’re going to get up and start making noise.

“You need a quick escape plan all the time, so this is great. We, including the kids, love the kids series,” Maloney said.

An excited 5-year-old Jakob Dorfman, dressed as a horse, jumped up and down to “In the Hall of the Mountain King.” The autistic boy looked at times as if he were conducting the musicians, and applauding them.

“Jake loves music, instruments, he loves to see the orchestra, and an event like this lets him stand up, move his hands and get up and move around,” said Rachel Dorfman, Jakob’s mother. “There’s also a quiet space downstairs, which is great.”

Kerrin Walling also appreciates how welcoming the BPO kids shows are. She was with autistic daughter Larkin, 11, who came as Elmo, and son Julian, 9, a self-described zombie doctor.

“Larkin’s autism makes it really hard to be in crowds like this, so it’s nice to have a place where we can go where she feels accepted and calm,” Walling said.

The concert kicked off the first of the season’s six BPO Kids concerts.

“Over the years we have been building up this series because increasing the number of young people and families introduced to the BPO is a really important part of our mission,” said Robin Parkinson, the BPO’s director of education and community engagement.

While leaving the auditorium, the Mercurio family expressed satisfaction with the concert.

“It was a spectacular performance, the performers were awesome, we loved the song choices and the kids were having fun and going along with it,” Scott Mercurio said.