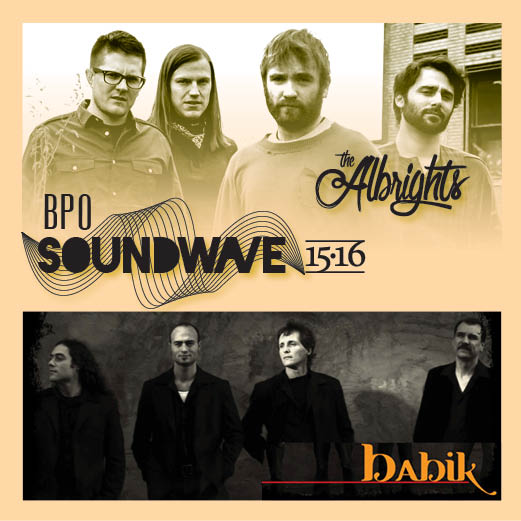 BUFFALO, NY -Buffalo musicians of all types will unite on the Kleinhans stage for one night in September.

On Thursday, Sept. 24, the Buffalo Philharmonic will present “Soundwave,” featuring Buffalo bands The Albrights and Babik and works by contemporary rock-inspired composers and songwriters Mason Bates, Adam Schoenberg, and Sufjan Stevens. BPO Associate Conductor Stefan Sanders will be on the podium. Tickets are $20 general admission and $10 for students. An after-party features Verve Studios dancers and a DJ. Admission includes a complimentary slice of pizza and a beverage. Additional food and beverages will be available for purchase.

Fresh from an East Coast tour, The Albrights are among Buffalo’s most acclaimed and popular bands, featuring lead vocalists Brandon Barry and Joe Donohue III with Matthew Crane and Dustin Herzberger on rhythm. The Albrights’ music is influenced by pop, indie rock, and Americana sounds, and has earned praise from The Buffalo News, The Provincetown Banner, and The Aquarian Weekly. They have released two albums and performed with Everclear, Fountains of Wayne, The Psychedelic Furs, and Fitz and the Tantrums. Recently, they collaborated with the West Seneca East High School Chorus to perform choral arrangements of their songs. Over the summer, they will work with the BPO to develop orchestral charts for their songs “Virgin,” “Over and Over,” “Zion Man,” and “Soundwave.”

“As a band of musicians and songwriters, we thrive when we share our music with other artists. The chance to work with the Buffalo Philharmonic Orchestra, in the legendary Kleinhans Music Hall, is a dream come true,” said Donohue.

Babik’s sound was inspired by the late Django Reinhardt, an early-20th-century musician who blended traditional Romani, or Gypsy, music with jazz. From 2004 to 2012, Babik members Stuart Fuchs, Geoffrey Fitzhugh Perry, Joshua Assad, and Kevin O’Brien ruled Buffalo’s jazz scene with their own twist on the sound. They released two albums, won seven awards from Artvoice and Buffalo Spree, and presented their high-energy, inventive shows all over the region, including two well-received performances with the BPO. In 2012, they amicably parted ways when two of the band members moved out of the region. Babik will reunite for this concert and perform several of their signature pieces with the BPO.

Composer Mason Bates was in Buffalo in 2014 for the BPO’s West Side Connection education concert. The orchestra will perform his “Warehouse Medicine,” which evokes the abandoned warehouses of his native Detroit where the techno genre was born. Adam Schoenberg drew inspiration for “Finding Rothko” from an exhibit of painter Mark Rothko’s works. The orchestra will play “Wine” from the piece. Sufjan Stevens is a multi-instrumentalist who has released albums in genres ranging from electronic to folk. His album “Enjoy Your Rabbit” was originally released as an electronic album and explored the Chinese zodiac. In 2009, it was re-released as “Run Rabbit Run” and the music re-arranged for string quartet. The orchestra will perform “Year of The Dragon” and “Year of the Dog” from this album. Jonathan Newman, known for incorporating pop, blues, jazz, folk, and funk into classical models, originally wrote “Blow It Up, Start Again” for the Chicago Youth Symphony Orchestra in 2011.

“Music is the world’s most popular language, and there is a whole new generation of songwriters and composers that are finding inspiration from one another,” said Sanders. “Two of the pieces the BPO will play on this concert are magnificently influenced by popular music: Jonathan Newman’s funkalicious ‘Blow it Up and Start Again’ and Mason Bates’ techno-orchestral masterpiece ‘Warehouse Medicine.’ Sufjan Stevens’ music is an amazing mix of minimalist expression (think of Philip Glass or John Adams) and his unique voice of instrumental indie rock meets Americana. Adam Schoenberg’s ‘Wine’ is beautifully ambient, and transports the listener into a world of luscious orchestral sounds. Whether it is Beethoven or Billy Joel, music is an explosive expression of humanity, and perhaps its most powerful instrument is the orchestra. We hope that Soundwave will be embraced by BPO fans, new music fans, and fans of The Albrights and Babik alike. We can’t wait to present this to Buffalo.”

The event is supported by a grant from the J. Warren Perry and Charles Donald Perry Memorial Fund at the Community Foundation for Greater Buffalo, and by UB University Life and Services. Tickets for Soundwave will go on sale Monday, June 15 at the BPO box office. Call (716) 885-5000 or visit bpo.org.