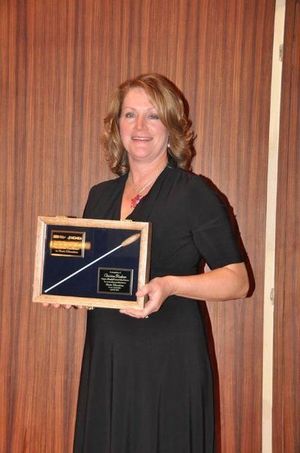 Saturday, April 25 will mark the annual Celebration of Music Education at Kleinhans Music Hall, presented by the Buffalo Philharmonic Orchestra.  A reception and awards ceremony open to honorees, music educators, administrators and supporters of music education will be catered by Oliver’s and take place at 6:30 p.m. At the beginning of the 8 p.m. concert, honorees will be recognized before the BPO audience.

Harter Secrest & Emery LLP will receive the BPO’s Leadership in Music Education Award. The downtown Buffalo law firm has underwritten the BPO’s West Side Connection program for the past two years, which has brought BPO musicians into the schools on the West Side and culminated in a concert which was broadcast to thousands of students in all eight counties of Western New York.

Iocco has taught at Iroquois Central High School for 15 years, serving as director of the Wind Symphony, Symphonic Band, Jazz Ensemble, and Marching Band. He is the associate director of the Erie County Wind Ensemble, and has served as a guest conductor for various All County and Area All-State honor bands. He performs percussion locally with Erie County Wind Ensemble, Clarence Summer Orchestra, and the Village of Hamburg Concert Band. He is a member of the Erie County Music Educators Association, New York State Band Director’s Association, New York State School Music Association, National Association for Music Education, and the Buffalo Musicians’ Association.

Kerr began her teaching career in 1990 at the Buffalo Academy for Visual and Performing Arts, and has taught music, English, and theater in several Buffalo Public Schools since then. She is currently the Director of Bands at City Honors School where she conducts the Concert, Marching, Jazz and Pit Bands. She is active in NAfME and ECMEA, and has served as an adjudicator and festival chair for NYSSMA. She is involved in the BPO/ECMEA Community Spotlight Program and has also served on the BPO Curriculum Planning Committee. She founded the Andrews Sister tribute group The Buffalo Dolls, and sings with them frequently.

Sullivan has taught in the Depew school district for 38 years, and is currently the director of the Depew High School Concert Choir, Mixed Chorus, SSA Chorus and Show Choir.  She is producer and music director for the annual musical production and a music department co-chairperson. As a member of ECMEA, she has served as an All-County Chorus chairperson at both the junior high and senior high levels, as a member of the county’s Scholarship Audition Committee, and as a presenter at the January WNY Conference Day for Music Educators.  Sullivan is also a member of NYSSMA and ACDA.  She has been included in “Who’s Who Among American High School Teachers” and was named Depew Schools’ Educator of the Year in 1988.

The BPO and the Niagara County Music Educators Association are recognizing Christine Riederer with their award for excellence in music education. Riederer has taught at Niagara-Wheatfield Senior High School for 21 years. She conducts the Concert and Symphonic Bands, and teaches music theory and instrumental lessons. Prior to her appointment at Niagara-Wheatfield, she taught band and orchestra in Ohio and Michigan and trumpet at the Interlochen Arts Camp in Michigan. She is a member of NAfME, NYSSMA and NCMEA.  She has guest conducted the ECMEA Junior High South All-County Band and served as Chairperson for the Senior High Area All-State Band and Senior High All-County Bands numerous times over the years. She lives in Grand Island.

The Friends of the BPO will present their three scholarship winners at this event. The scholarships are awarded annually to graduating high school seniors who intend to further their careers in music, and include an opportunity to perform with the BPO over the summer.

The first prize winner is Grace Ann Lee of Williamsville East High School. Lee began cello and piano studies in Korea, where she won the Korean National Piano Competition twice and was the third place winner of the Huang San Bul National Korean Traditional Folk Music Competition. Since 2011, she has performed in Erie County Orchestras, the Greater Buffalo Youth Orchestra, Area All-State Orchestra, and NYSSMA Conference All-State Orchestras. She received a 2015 Silverman String Scholarship from the Buffalo Chamber Music Society. She is also a composer who has won many accolades: winner of the 2014 and 2015 Young Arts National Foundation in Composition Award, and NAfME All-National Competition for Composers; Second Degree Winner of ‘The Other Composition Competition;’ 2012 and 2014 winner of the NYSSMA Honors Composers Competition; and the Persis Vehar Composition Competition. In the fall, she plans to study music composition with a concentration in cello performance.

The second prize winner is Lauren Scanio of Clarence High School. Scanio has played flute since fourth grade, and is also proficient on piccolo. She has performed in the Greater Buffalo Youth Orchestra, NAfME All-National Orchestra, American Music Abroad Symphonic Band, and the Lucerne Music Center Orchestra. She won three competitions in the period of one week:  the Rochester Flute Association Competition, the 198th Army Band Competition, and the Greater Buffalo Youth Orchestra Concerto Competition.  She has served as a substitute for the BPO in their performance of Mahler’s Fourth Symphony. In the fall, she plans to study flute performance.

The third prize winner is Angel Rhodes of Orchard Park High School. Rhodes is a violinist who began her studies at age 5. She has attended the Green Mountain Chamber Music Festival and Brevard Music Center Festival during the past two summers.  She is the winner of the Orchard Park Symphony Women’s Committee Concerto Competition and a 2015 recipient of the Buffalo Chamber Music Society’s Silverman String Scholarship. She has performed with NYSSMA Conference All-State Orchestra in 2013, Conference All-State String Orchestra in 2014, and the 2015 NAfME All Eastern Orchestra, as well as the Greater Buffalo Youth Orchestra. She is also a composer, and had her debut work performed by her high school orchestra last fall. She intends to major in violin performance at college.