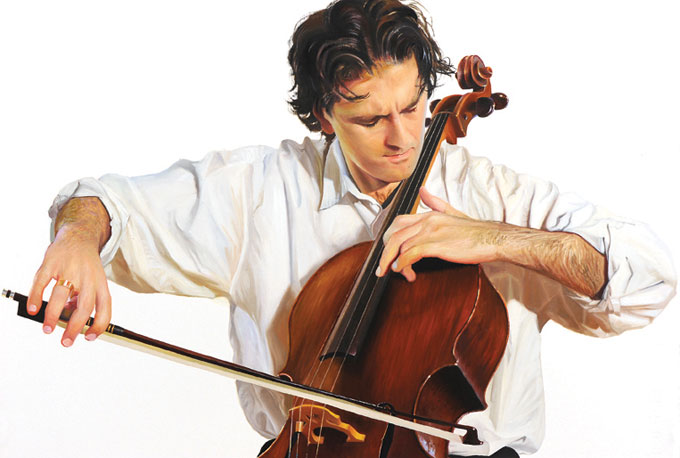 Buffalo Philharmonic Orchestra music director JoAnn Falletta will be on the podium this Saturday, February 21 at 8pm and on Sunday at 2:30pm for a pair of concerts featuring Antonin Dvorak’s beloved Concerto for Cello and Orchestra in B minor, Op.104. Making his BPO debut, the internationally touring Israeli-American cellist Amit Peled, professor of cello at the Peabody Conservatory of the Johns Hopkins University in Baltimore, will be the featured soloist in the Dvorak.Peled will be performing the Dvorak concerto on a very special instrument, a 1733 cello by the Venetian master Matteo Goffriller once owned by the legendary Spanish-Catalan cellist, Pablo Casals, who almost singlehandedly established the importance of the cello as a solo instrument.

So, just how did Amit Peled, who was born on Yizreel kibbutz, near Nazareth in Israel in 1973, in the same year that Pablo Casals died, end up getting the use of the cello that Casals purchased for a reported sum of 18,000 francs (roughly $676,00 today) in 1913? Last week, National Public Radio’s David Greene’s interview with Amit Peled a day before the cellist played a recital that recreated the same program that Casals performed at the Peabody, exactly one hundred years previously on February 11, 1915, on the same cello that he would be using provides some of the answers.

Not surprisingly, it all began with a girl. “I started to play because of love for a girl, not love for music”, Peled explained to Greene. “So I was 10, and I was in love with a girl who was 14. And she played cello. And the music room in our small community was under my classroom. So every afternoon before I would go to play basketball, I would hear her and see her practice cello. And when it was my time to decide what instrument—because part of our education was in fourth grade, everybody had to pick up an instrument. So the music teacher asked me, Amit, what do you like to play? And immediately, I said cello. And my plan or my scam was, you know, I’ll play the cello. And probably, I’ll have cello lessons with her. I’ll go on the school bus with her. I had everything planned out.”

The girl was four years older, and he never even talked to her, but his parents, who were farmers and not musicians, did buy him a cassette tape of Casals. “And on my bed,” he said “I had the boom box, and every single night, I would press play and fall asleep by the time it got to the end. And I fell in love, literally, with the sound. I mean, if an angel would come down and tell me, you know, one day, you’ll play that exact cello. I mean, it would be, really, a joke.”

After attending a Tel Aviv boarding school for musically gifted students, Peled spent three years of his mandatory service in the Israel Defense Forces playing in a select string quartet founded by Isaac Stern. A scholarship student at Yale, he left after a year to become a student of Bernard Greenhouse, a former student of Pablo Casals, who helped found the Beaux Arts Trio. While studying with Greenhouse, Peled finished his degree at the New England Conservatory in Boston. Besides experiencing the pedagogical support of Greenhouse, who continued playing the cello into his mid-90’s, Greenhouse also lent him the use of a rare, 1689 Andrea Guarneri cello that he had purchased as an investment.

Peled has gone on to develop a major career, performing internationally as a soloist with many orchestras in the United States and Europe and in the world’s major concert halls including Carnegie Hall and Alice Tully Hall in New York, the Salle Gaveau in Paris, Wigmore Hall in London, the Konzerthaus in Berlin and the Mann Auditorium in Tel Aviv. The New York Times praised his “Glowing tone, a seductive timbre and an emotionally pointed approach to phrasing that made you want to hear him again,” after his Alice Tully Hall debut in the Hindemith cello concerto.

But, there was a fly in the ointment. Speaking in the upcoming March issue of Strings Magazine of his Guarneri, Peled says that while he loves the cello, “concertgoers would often comment how he dwarfs the instrument (Peled is 6’5” tall). I got sick of it, that people made this comment all the time, he says. “It was never about the sound, it was about the size of the cello.” Knowing that he was looking for a cello that was physically larger, Peled’s friend Neale Perl arranged for him to meet, and play a few years ago for Casal’s widow, Marta Casals Istomin, thinking that she might have a connection to someone who would lend him a more appropriate cello. The meeting, in her Washington DC apartment, quickly turned into an intense question and answer session, with Marta quizzing Amit closely, as to why he played almost every detail the way that he did.

But, there was a happy ending, since Marta next invited Amit to her New York City apartment, to play on her late husband’s cello. Amit impressed her enough to let her entrust the cello to him: “He really understood or felt the way this instrument works,” she said, letting him join the ranks of cellists such as the late David Soyer, and the barrier-breaking Matt Haimovitz, who have had the privilege of using it. “It’s something that I decided to do because the cello needs to be played, and I felt this was a way in which the maestro (Pablo Casals) would love to have it happen that this instrument would be kept alive by a younger generation of cellists,” said Marta.

So I was 10, and I was in love with a girl who was 14. And she played cello. And the music room in our small community was under my classroom. So every afternoon before I would go to play basketball, I would hear her and see her practice cello.”

But the saga continued, as after playing on Casals’ cello for less than three months, Peled noticed that the fingerboard was unusually low, and Marta decided that it was time to take it to a luthier, for what she called “a thorough revision.” New York City luthier Julie Reed-Yeboah said “The idea was to stabilize it because Amit had been playing it, and it was losing power.” The cello was under repair for almost a year, but Julie says that “When Marta heard it, she said she recognized its voice, which was a big relief.”

“Thank God it worked!” Casals Istomin says. “She did a wonderful job, and the cello is in great health, and hopefully it will be played for many years to come.”

Peled will be joining a distinguished roster of cellists that have performed the Dvorak concerto with the BPO, including Gregor Piatigorsky, Pierre Fournier, Leonard Rose, Janos Starker, Zara Nelsova, Lynn Harrell, Gustav Rivinius, Yo-Yo Ma and most recently, Zuill Bailey.

The program also includes Paul Dukas’ tone poem The Sorcerer’s Apprentice, a work last programmed, amazingly, on a BPO Classics series concert in 1958. It has become the composer’s best-known and most often performed composition, in no small part due to its unforgettable incarnation by Mickey Mouse, in Walt Disney’s 1940 animated film Fantasia. Also on the program is a BPO premier, L’Etude pour “Le palais hanté” op.49, or The Study on “The Haunted Palace,” a turn of the 20th century tone poem by the French composer Florent Schmitt, it will be only the second-ever work by the composer to appear on a BPO program. Completed in 1904, the work was based on 1839 poetry by Edgar Allan Poe, an author whose works seemingly have had more appeal in translation, or, at least in that of the symbolist poet icon Stephane Mallarmé, to a French audience, than to an English-speaking one.