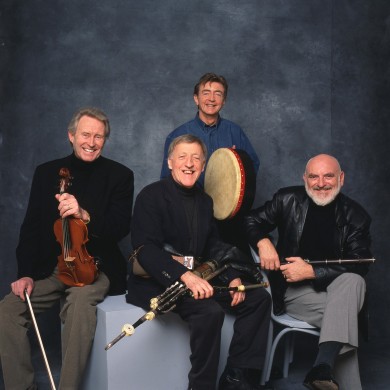 Take away the parades. Blockade the crowds of green. Lock up the Guinness and put the lid on ethnically inaccurate servings of corned beef. If you want to know what really courses through the veins of anyone with Celtic lineage, turn away from these propagated accompaniments and listen to the music.

The tribal thump of the bodhrán. The tin whistle and pipes, the accordion, fiddles and flutes. Let their communion march through your chest, dizzy your head and tap your heel, and understand that this instrumental infusion is what fuels the Irish heartbeat.

Also understand that no collection of traditional musicians are better at facilitating this ancestral pulse than the Chieftains, who were joined by the Buffalo Philharmonic Orchestra on Friday to officially usher in the season’s St. Patrick’s Day weekend with a rousing two-hour session inside Kleinhans Music Hall.

Formed in Dublin in 1962 by founding member Paddy Moloney, the six-time Grammy winners have not only devised the soundtrack for family hooleys, step-dancing duels and pub dates, but have popularized Ireland’s traditional music on a worldwide scale. They’ve collaborated with expected partners like Sinead O’Connor and Van Morrison; backed the likes of Bon Iver and Ziggy Marley (for a tremendous version of his father’s “Redemption Song”); and paved the way for more frenetic pipe-wielding acts like Flogging Molly and Dropkick Murphys. For over five decades, musicians of all types have flocked to the band’s rare blend of cycling rhythms and spiritual cohesion, hoping to bask in the glow of the Chieftains’ emerald-hued incandescence. Read More.