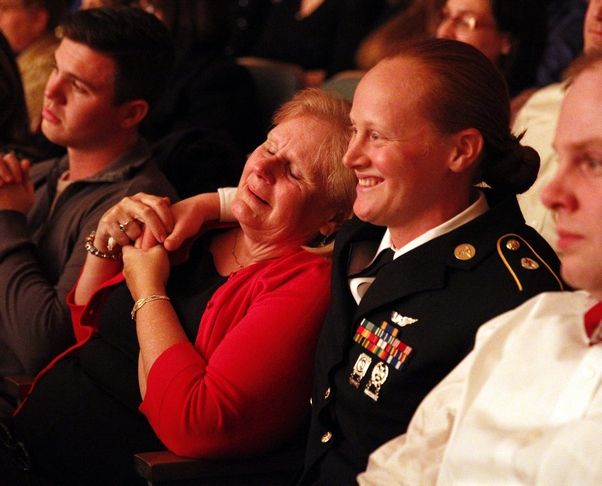 The one song Buffalo Philharmonic Orchestra musicians did not play at their annual Swingin’ Holiday Pops concert Saturday night was “I’ll Be Home for Christmas.”

They didn’t have to.

Sgt. Katie Bauman, who had not seen her family since she went to Afghanistan a year ago, stole the show when she surprised her mother onstage at Kleinhans Music Hall during the concert.

Her family was swept away, and more than a few in the nearly sold-out audience wiped away tears when Bauman hugged her mother, Mary Beth Bauman-Moyer. Attending the Holiday Pops concert is a tradition for the family, one Bauman had not been able to take part in for a number of years.

She started planning her surprise in the fall, talking to Susan Schwartz, the BPO’s director of marketing and communications, from Afghanistan. WBEN came through with tickets for the family members, who were told they won a contest.

Listeners had hardly settled into their seats, and the Buffalo Philharmonic Orchestra played the final notes of “A Christmas Overture,” when guest conductor Ron Spigelman turned to the audience and said he had a special package that had come a very long way, and he asked Mary Beth Bauman-Moyer to come to the stage. He explained that attending Holiday Pops is a longtime tradition for her and her family.

“The last few years, something has been missing,” he said.

“Where is the package?” Spigelman asked, looking around.

That’s when Army Sgt. Katie Bauman walked onstage, hugging her mother as the audience and musicians broke out in thunderous applause.

“Oh my goodness, it’s my daughter! I love you, I miss you,” Bauman-Moyer told her.

Bauman, 27, a graduate of Sweet Home Central High School with an athletic training degree from Canisius College, was raised in the Town of Tonawanda and Amherst. A flight medic, she returned from Afghanistan several weeks ago and now is stationed in Fairbanks, Alaska.

Bauman thanked the BPO, and her family.

“I want to thank my family who supported me through the whole deployment,” she said.

“But mostly, keep in mind, there is still a war going on,” she said. “There are thousands of soldiers outside the United States. Keep them in your prayers and thoughts.”

“This is such a unique moment,” Spigelman said. “I have no idea how to segue into “Christmas on Broadway.”

Bauman and her mother walked to their seats, where her stepfather and four brothers hugged her, brother Pat climbing over his seat to get to her. They sat down, and Bauman-Moyer lay her head on her daughter’s shoulder, her Christmas wish come true.

Bauman began dreaming of her Christmas homecoming months ago. The visit was plotted meticulously to be a surprise to the family, with the exception of one family member, a sister-in-law, who assisted in the plans.

The soldier’s insistence on secrecy was such that she declined all pre-concert publicity and pleaded with the Philharmonic not even to release her name beforehand, lest details get out and the surprise be spoiled.

“It is about family. It’s not about presents, it’s not about anything like that, especially with deployment,” she said during intermission. “It’s being with those who care for you day in an day out.”

Bauman was in seventh grade when terrorists attacked the United States in 2001.

“It resonated with me and it stuck with me,” she said, adding she waited until she earned her college degree to enlist.

“One thing I realized in Afghanistan, if it’s not on the front pages, people forget about it. So just remember them,” she urged. “I have a lot of friends still in Afghanistan, some people are in Iraq. There are people all over the world.”

It was an emotional night for Bauman and her family, and almost more difficult than being in Afghanistan.

“Onstage was nerve-wracking,” she said. “Deployment was a lot less stressful than walking out on that stage, I can tell you that.”