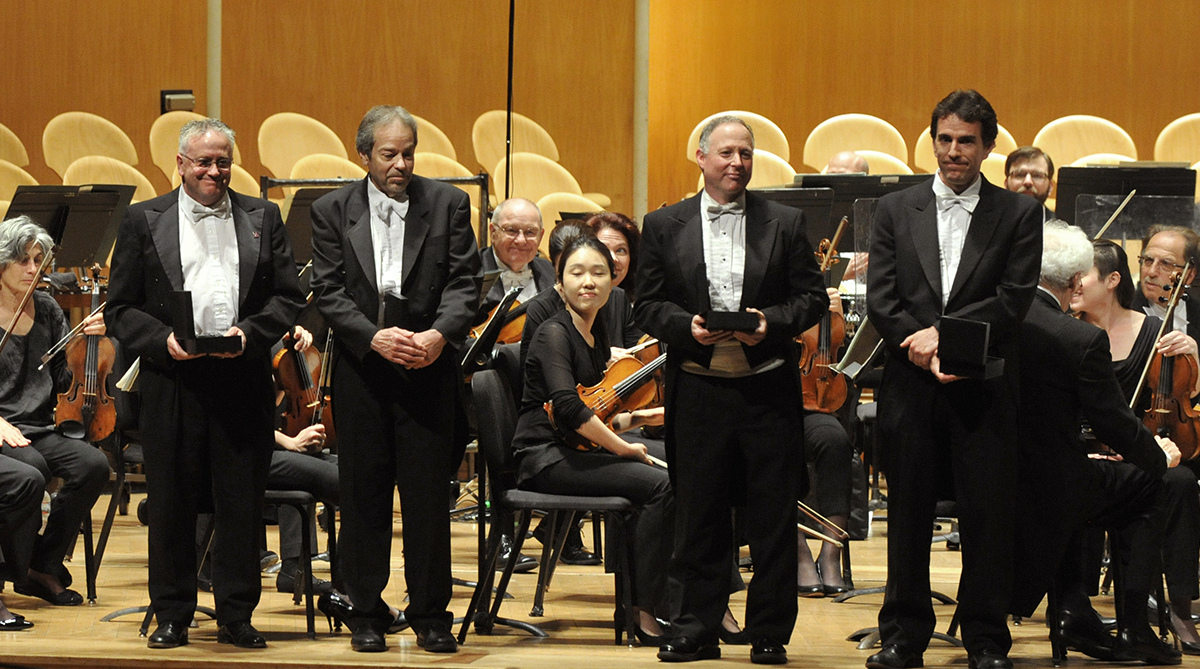 On June 3, 2017, we honored four musicians who were celebrating an anniversary with the orchestra.

Cellist Robbie Hausmann joined the BPO in 1982 under Julius Rudel. He is one of only a few musicians in the orchestra who are native Western New Yorkers. He studied at Juilliard and at Eastman, and serves as associate director of the Buffalo Chamber Music Society. He also has a strong interest in lesser-known Jewish composers, and has presented recitals in collaboration with pianist Alfred Frenning for 20 years.

Violinist Robert Prokes joined the BPO in 1982 under Julius Rudel. He attended Wichita State University and studied with legendary violin teacher Sally Thomas post-graduate. He grew up in a musical family, and replicated that as an adult: his wife Patricia teaches at City Honors and the Buffalo Montessori School, and his daughter Megan is also in the BPO violin section, while his other daughter Tea is Associate Concertmaster at Toledo Symphony and a first-call substitute for the BPO. He maintains a private chamber studio and gathers with friends to play chamber music regularly.

Violinist Alan Ross rounds out the “class of 1982,” having also joined under Julius Rudel. He attended the Cleveland Institute of Music,  the Philadelphia Music Academy and the University of Cincinnati College Conservatory of Music. Prior to his tenure in Buffalo, he lived in Venezuela for three and a half years, and played in two different orchestras during that time.  He taught at Eastman and SUNY Fredonia, and now teaches out of his home. He spends a great deal of his free time with his two grown children and his two grandchildren, all of whom have settled in the area.

Violist Matthew Phillips joined the BPO in 1997 under Maximiano Valdes. Phillips also grew up in Western New York. He studied at Cleveland Institute of Music and The New England Conservatory, and was a finalist in the 1992 William Primrose International Viola Competition. He is married to Rachel Kregal, whom he met while they were both students playing in the Greater Buffalo Youth Orchestra. Phillips is an avid runner, and has qualified twice for the Boston Marathon. In 2007, he was the second place age group winner in the Buffalo News Runner of the Year race series.