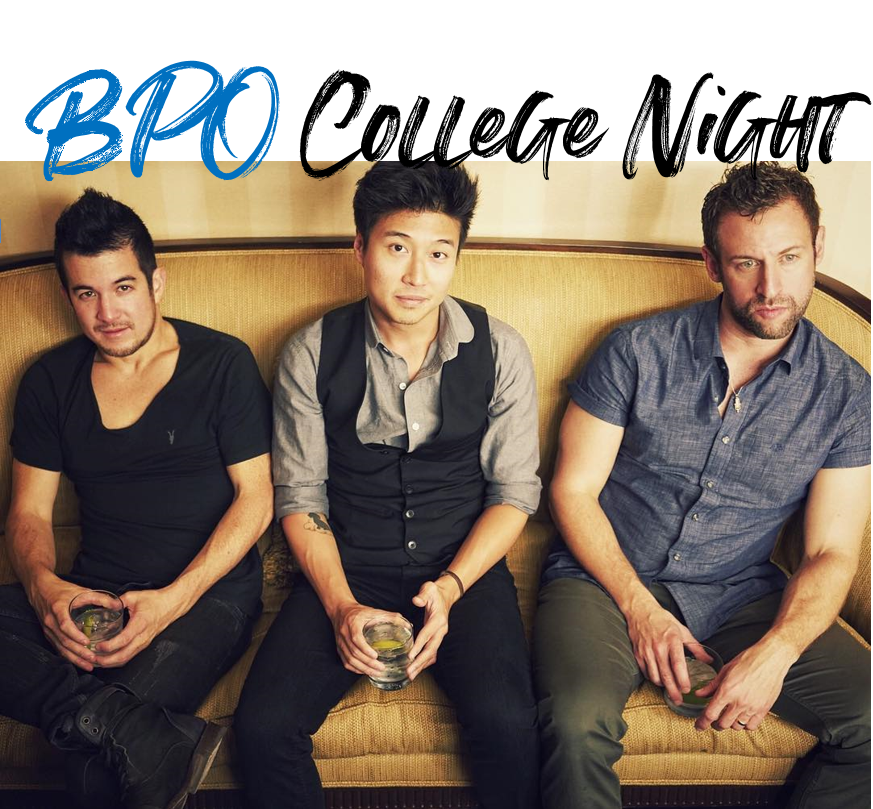 Use code COLLEGENIGHT at checkout for your $12 tickets!

Tickets are limited and registration is required. Valid college ID is required at will-call.

BPO College Pass holders – No need to buy a ticket, but please RSVP to reserve your spot!

College students, join us for a night of music, mingling and fun and #FeelTheVibes with your Buffalo Philharmonic Orchestra at this power-packed performance!

Watch the video below for a sneak peek!

About Time for Three

Defying convention and boundaries, Time For Three stands at the busy intersection of Americana, modern pop, and classical music. To experience Time For Three (TF3) live is to hear the various eras, styles, and traditions of Western music fold in on themselves and emerge anew. Bonded by an uncommon blend of their instruments fused together with their voices, Charles Yang (violin, vocals), Nicolas “Nick” Kendall (violin, vocals), and Ranaan Meyer (double bass, vocals), have found a unique voice of expression to share with the world.

Earning praise from NPR, NBC, The Wall Street Journal, and the Chicago Sun-Times to name a few, the band has become renowned for their charismatic and energetic performances. Having graced the stages of Carnegie Hall, The Kennedy Center, and The Royal Albert hall, their inimitable and mutable style fits equally well in an intimate club setting, like Joe’s Pub in New York, or Yoshi’s in San Francisco. In 2016, Time For Three was featured on the famed “Night of the Proms” tour, sharing the stage with such artists as Chaka Khan and Ronan Keating, playing arenas throughout several European countries. The trio has collaborated with artists as diverse as Ben Folds, Branford Marsalis, Joshua Bell, Aoife O’Donovan, Natasha Bedingfield, and Arlo Guthrie, and have premiered original works–written for the band–from composers Chris Brubeck and Pulitzer Prize-winners Jennifer Higdon and William Bolcom. They’ve appeared on ABC’s Dancing With The Stars, and won an Emmy for “Time For Three In Concert,” produced by PBS. Yet for all their accolades and diverse experiences, the irrepressible band constantly hungers for new ones.  With a collection of new songs, the band has teamed up with GRAMMY-winning songwriter Liz Rose and GRAMMY-winning producer Femke Weidema for new recordings set to be released in 2019 through Warner Music. An upcoming commission project includes a work by Pulitzer Prize winning composer, Kevin Puts, which will be premiered by the San Francisco Symphony and the Philadelphia Orchestra in the summer of 2020.