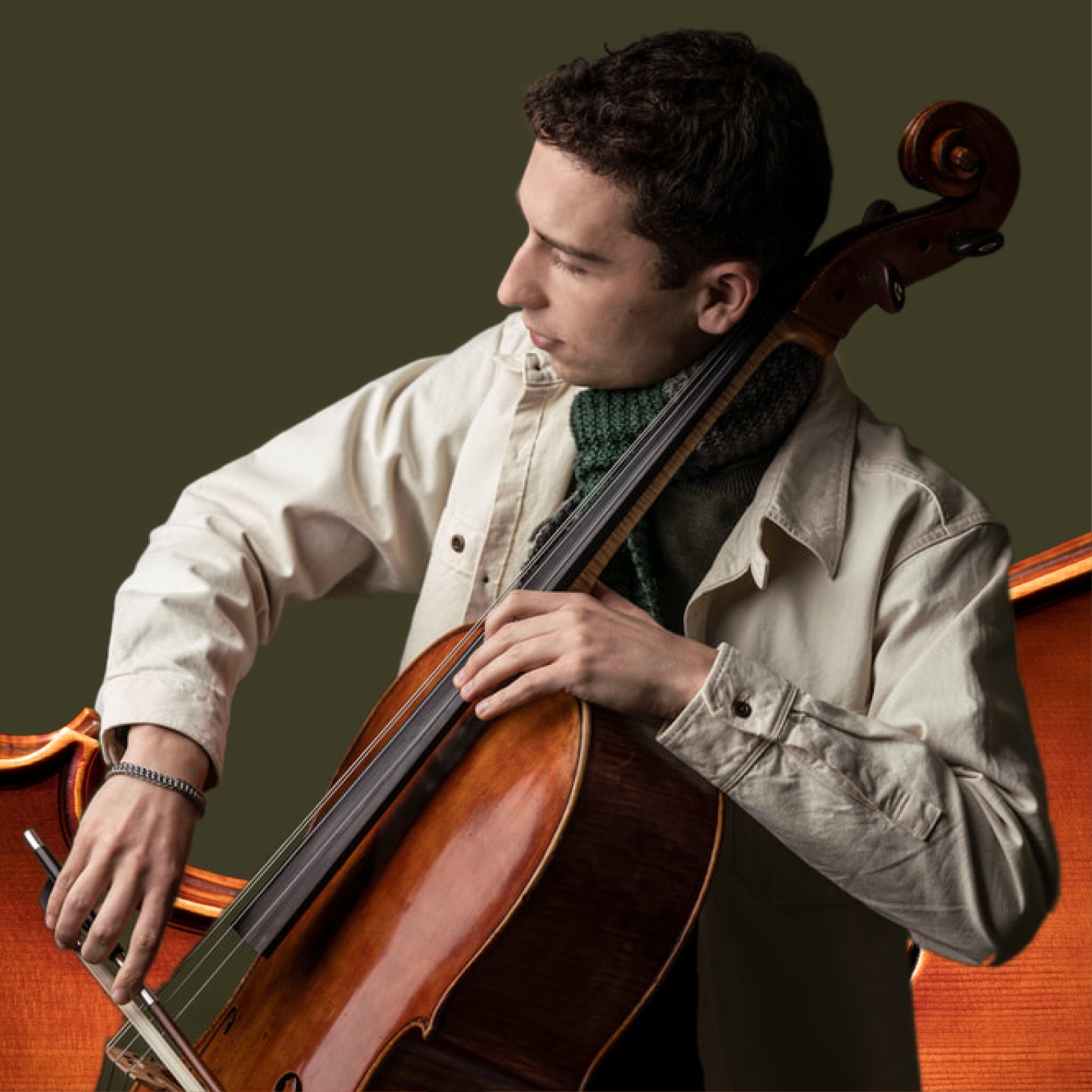 Robert Schumann’s poetically expressive Cello Concerto was written in a brief two weeks of 1850 shortly before he was institutionalized, but rarely performed before the end of the 19th century. Similarly, Franck’s only symphony, both melancholy and luminous, was originally considered too avant-garde and radical, but became his most popular work after his death. The vibrant energy of an urban city ‘block’ is captured in Carlos Simon’s musical depiction of the visual art of Romare Bearden, reflecting Harlem as a hotbed of African-American culture.

Watch the video below for a preview of Oliver Herbert’s performance: 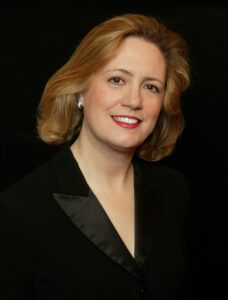 Praised by critics as “an ideal music director whose infectious energy is as contagious as her exuberant and thoroughly committed musicianship,” Elizabeth Schulze is currently the Music Director and Conductor of the Maryland Symphony Orchestra. She is also the Artistic Director of the Flagstaff Symphony and the Principal Guest Conductor of the Hudson Valley Philharmonic.

Ms. Schulze has performed as guest conductor with numerous American orchestras and opera companies, including the Milwaukee, Colorado, North Carolina, New Haven, Madison, Eugene, Annapolis, Greenville, Omaha, Oregon, Stamford, Eastern Connecticut, Anchorage and National Symphonies, the American Composer’s Orchestra, Buffalo and Tulsa Philharmonics, Chicago Sinfonietta, Baltimore Chamber Orchestra, San Francisco Women’s Philharmonic, Chicago Civic Orchestra, the Tulsa Opera Company and the Colorado Opera Troupe. In 1996 she made her European debut leading the Mainz Chamber Orchestra for the opening concert of the Atlantisches Festival in Kaiserslautern, Germany. She appeared in Paris, London, Frankfurt, Amsterdam, and Vienna with the National Symphony during its 1997 European Tour. She has performed as guest conductor at the Aspen Music Festival where she served as Assistant Conductor. Ms. Schulze has also been a guest assistant conductor at the Paris Opera (Bastille) and at the Boston Symphony Orchestra. Recent guest appearances include debuts with the Baltimore, Detroit, San Francisco, and New Jersey Symphonies as well as two appearances with the Jerusalem Symphony in concerts in Tel Aviv and Jerusalem. This season, she returns to the Detroit Symphony.

A strong advocate of music education, Ms. Schulze has led the American Composer’s Orchestra in several educational and family concerts in Carnegie Hall and throughout the five boroughs of New York City. While in Iowa, her innovative approach to educational programming led to interactive broadcasts of educational concerts to classrooms throughout the state over the fiber-optic network. She has performed as an artist-in-residence at Northwestern University, and has been a frequent guest conductor of the orchestras of The University of Maryland, the Manhattan School of Music, and recently, The Catholic University of America.

This season Schulze returns for a tenth year to conduct the All County High School Orchestra of Washington County. She has taught at the National Conducting Institute sponsored by the National Symphony and the Kennedy Center for six years, and she has also once again been engaged to teach and conduct at the NSO/Kennedy Center’s Summer Music Institute for gifted youth, a position she has held for eleven summers.

Ms. Schulze was the recipient of the first Aspen Music School Conducting Award in 1991. An honors graduate of Interlochen Arts Academy and Bryn Mawr College, where she earned an A.B. cum laude in Philosophy, she holds graduate degrees in Orchestral and Choral Conducting from SUNY at Stony Brook. The first doctoral fellow in Orchestral Conducting at Northwestern University, working with Victor Yampolsky, she has been a Conducting Fellow at Les Écoles d’Art Americaines in France as well as at prestigious music festivals in America. At Aspen, she worked with Murry Sidlin, Lawrence Foster and Sergiu Commissiona. As a Tanglewood Fellow, she worked with Seiji Ozawa, Gustav Meier and Leonard Bernstein. 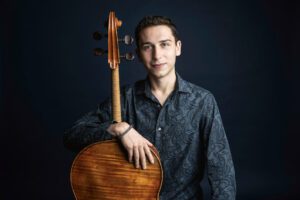 Cellist Oliver Herbert is quickly building a reputation as an artist with a distinct voice and individual style, admired by audiences for his communicative and connective performances. The recipient of a 2021 Avery Fisher Career Grant, Oliver has been praised by San Francisco Classical Voice for his “expansive tone, virtuosity, and musical instincts.” Recent appearances include debuts with world renowned ensembles including the San Francisco Symphony, Chicago Symphony Orchestra, Warsaw Philharmonic, and Edmonton Symphony Orchestra.

Oliver is equally at home playing well-known works as well as exploring uncharted musical territories. The 2021-22 season marks the beginning of several ambitious projects, including performances of the complete Bach Cello Suites at Capital Region Classical and the complete Beethoven Cello Sonatas at Guarneri Hall in Chicago. Oliver will also be premiering a commissioned work by Chelsea Komschlies for multitrack cello and electronics, as well as exploring the music of Venezuelan composer and cellist Paul Desenne. Concerto highlights for the 2021-22 season include performances with the Buffalo Philharmonic, Kitchener-Waterloo Symphony, New World Symphony, and Rhode Island Philharmonic—performing works by Barber, Ibert, Saint-Saens, Schumann, and Tchaikovsky.

In June of 2020, Oliver released his debut album with pianist Xiaohui Yang, Frame of Mind: Fauré and Janáček, featuring the two cello and piano sonatas of Gabriel Fauré as well as Leoš Janáček’s Pohádka (Fairy Tale). Oliver’s additional recording highlights include a release of Haydn’s D Major Cello Concerto with Michael Tilson Thomas and the San Francisco Symphony. Interested in the intersection of visual art and music, Oliver also enjoys working on mixed media and video projects. Recent collaborations in this area include projects with filmmakers Lone Cricket, Mike Grittani, and Mimi Pfahler.

As a chamber musician, Oliver has participated in leading music festivals including Caramoor, ChamberFest Cleveland, Krzyżowa Music, La Jolla Summerfest, Marlboro Music, Music in the Vineyards, Nevada Chamber Music Festival, Ravinia, and Verbier. In the 2021-22 season, Oliver joins violinist Alexi Kenney and pianist Eric Lu for a program of Haydn, Schumann, and Schubert at the Philadelphia Chamber Music Society.
​
Born in San Francisco, Oliver is a graduate of the Curtis Institute of Music and the Colburn School where he studied with Carter Brey, Clive Greensmith, and Peter Wiley. Additional mentors include Pamela Frank and Dr. Ford Lallerstedt at the Curtis Institute. His competition awards include top prizes in the Lutoslawski International Cello Competition, Klein Competition, and Stulberg Competition. Oliver currently plays on a Guadagnini cello that belonged to the great Italian cellist Antonio Janigro, on generous loan from the Janigro family.