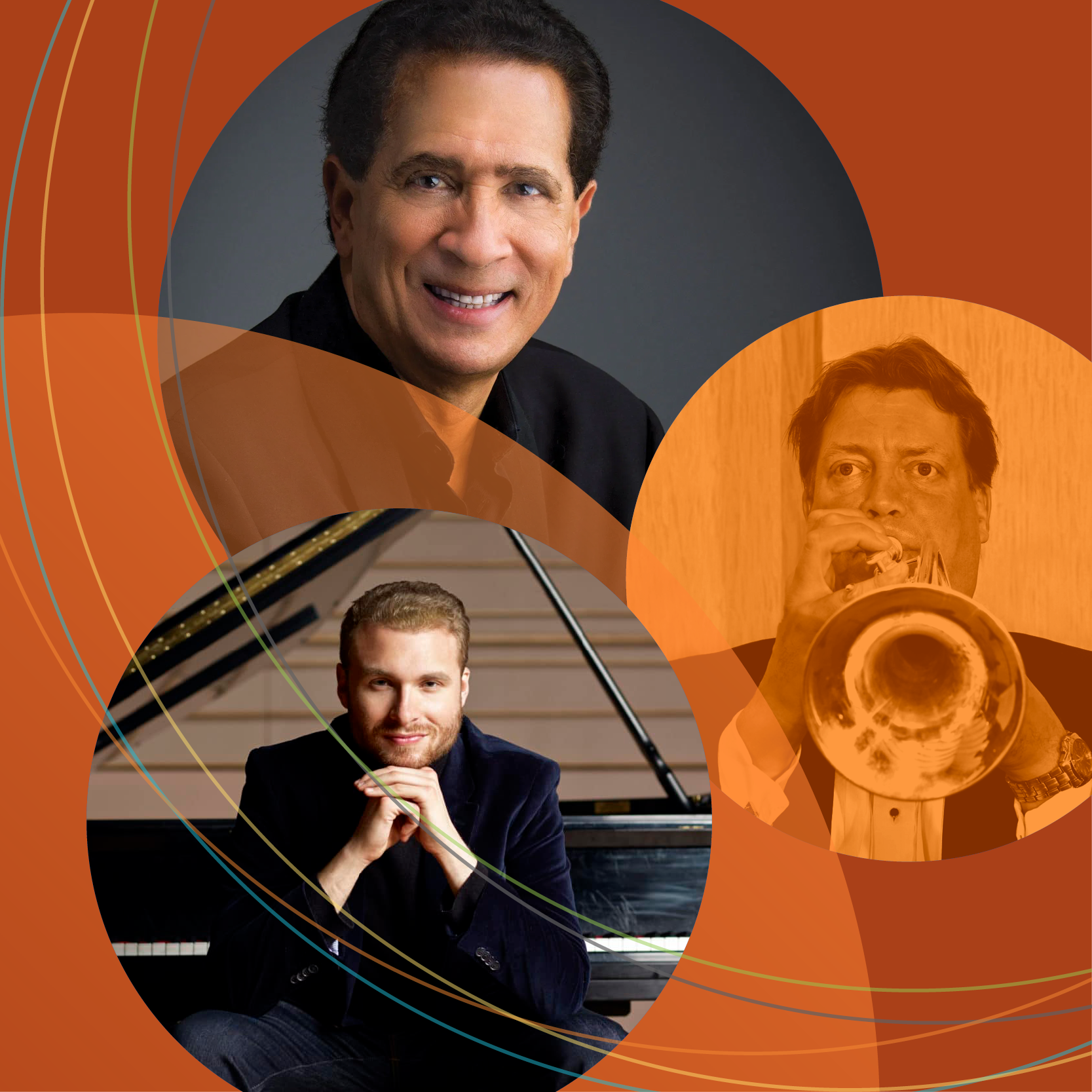 Lush and lyrical describes both Cordero’s sparkling and serene island travelogue, and the emotionally intense Serenade of Josef Suk, although composed over 100 years apart. Their beauty and tenderness are contrasted by the eclectic, spirited, and technically challenging Shostakovich concerto, featuring exceptional pianist Adam Golka and BPO principal trumpet Alex Jokipii. 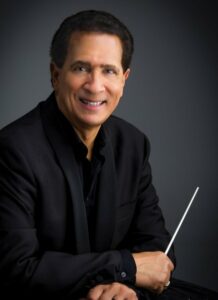 Guillermo Figueroa is the Principal Conductor of the Santa Fe Symphony. He is also Music Director of the Music in the Mountains Festival in Colorado and the Lynn Philharmonia in Florida. He was the former Music Director of both the New Mexico Symphony and the Puerto Rico Symphony. With this last orchestra, he performed to critical acclaim at Carnegie Hall, the Kennedy Center and Spain.

His international appearances include the Toronto Symphony, Iceland Symphony, the Baltic Philharmonic in Poland, Orquesta del Teatro Argentino in La Plata, Xalápa (Mexico), the Orquesta de Córdoba in Spain and the Orquesta Sinfónica de Chile. In the US, he has appeared as guest conductor with the symphony orchestras of Detroit, New Jersey, Memphis, Phoenix, Colorado, Tucson, Toledo, Juilliard Orchestra and the New York City Ballet at Lincoln Center.

As a violinist, Figueroa’s recording of Ernesto Cordero’s violin concertos for the Naxos label received a Latin Grammy nomination in 2012. He was Concertmaster of the New York City Ballet, and a Founding Member and Concertmaster of the Orpheus Chamber Orchestra. Figueroa has given the world premieres of four violin concertos written for him: Concertino by Mario Davidovsky, at Carnegie Hall with the Orpheus Chamber Orchestra; Double Concerto by Harold Farberman, with the American Symphony at Fisher Hall, Lincoln Center; Violin Concerto by Miguel del Aguila, with the NMSO and Ínsula, Suite Concertante, by Ernesto Cordero with Solisti di Zagreb in Zagreb.

Mr. Figueroa studied with his father and uncle at the Conservatory of Music of Puerto Rico. At the Juilliard School his teachers were Oscar Shumsky and Felix Galimir. His conducting studies were with Harold Farberman in New York. 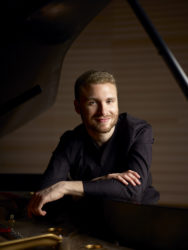 Polish-American pianist Adam Golka has been regularly on the concert stage since the age of sixteen, when he won first prize at the 2nd China Shanghai International Piano Competition. He has also received the Gilmore Young Artist Award and the Max I. Allen Classical Fellowship Award from the American Pianists Association, and was presented by Sir András Schiff in recitals at the Klavier-Festival Ruhr in Germany, Tonhalle Zürich, and in Berlin and New York.

Recent highlights include the Mozart Concerto No. 24, K. 491 with the NFM Leopoldinum Chamber Orchestra in Wroclaw,Poland; Mozart  No. 21, K. 467 with JoAnn Falletta and the Buffalo Philharmonic; Grieg’s Concerto with Symphony in C in New Jersey, and the Stravinsky Concerto for Two Pianos with pianist Roman Rabinovich in Tel-Aviv. Adam was presented on the Virtuosos Series by the Cliburn Foundation in Dallas, where he continues annual performances of his special education program: “Van Cliburn: An American Hero.” He made his San Francisco Symphony debut last summer in Beethoven Piano Cto. No. 4, when he also returned to the Krzyzowa Festival in Poland, a favorite destination of his, where he premiered his own two-piano arrangement of Debussy’s La Mer, and narrated – in Polish, English, and German – Saint-Saens’ Carnival of the Animals with his own poetry written especially for the opening concert of the Festival.

In concertos ranging from Mozart and Beethoven to Tchaikovsky, Ravel, and Rachmaninov, Golka has appeared as soloist with the BBC Scottish, Atlanta, Houston, Dallas, Indianapolis, New Jersey, Milwaukee, Phoenix, San Diego, Fort Worth, Vancouver, Seattle, and Jacksonville Symphonies, Grand Teton Festival Orchestra, National Arts Centre Orchestra of Ottawa, the Sinfonia Varsovia, the Shanghai Philharmonic, the Warsaw Philharmonic, and the Teresa Carreño Youth Orchestra of Venezuela. In 2011 he performed a cycle of all five Beethoven concerti with the Lubbock Symphony, under the baton of his brother, Tomasz Golka.

An avid chamber musician, Adam has participated in the Marlboro and Prussia Cove Music Festivals, Music @Menlo, Caramoor, with the Orpheus Chamber Players, and in regular appearances at Frankly Music in Milwaukee, as well as touring with the Manhattan Chamber Players.

In recital, Adam Golka has appeared at Lincoln Center’s Alice Tully Hall in New York; in the Mostly Mozart Festival in David Geffen Hall; Concertgebouw’s Kleine Zaal, and Musashino Civic Cultural Hall in Tokyo; and at the Gilmore Keyboard Festival, the Ravinia Festival, the New York City International Keyboard Festival at Mannes, the Newport Music Festival and the Duszniki Chopin festival. He has premiered solo works written for him by Richard Danielpour, Michael Brown and Jarosław Gołembiowski. Golka’s début disc, featuring the first sonata of Brahms and the Hammerklavier Sonata of Beethoven, was released in 2014 by First Hand Records.

In celebration of Beethoven’s 250th birthday in 2020, Adam is playing all 32 of Beethoven’s Sonatas in performance, in tandem with his next recordings for First Hand Records, which will release Adam’s complete Beethoven Sonatas.

Adam studied with the late José Feghali, and spent four years at the Peabody Conservatory studying with Leon Fleisher. Since finishing his official studies, he has continued his work with great musicians such as András Schiff, Alfred Brendel, Richard Goode, Murray Perahia, Ferenc Rados, and Rita Wagner.

Adam Golka acts as Artist-in-Residence at the College of the Holy Cross in Worcester, Massachusetts, where he teaches piano, chamber music, and conducts the Holy Cross Chamber Orchestra. 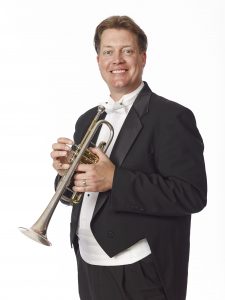 Alex Jokipii has held the position of Principal Trumpet with the Buffalo Philharmonic Orchestra since 1998. A native of Escanaba, Michigan, Jokipii’s earliest training in music began at the age of 11 when he took his first lessons on the B-flat trumpet his mother had kept from her days in the high school band. Alex began his advanced musical studies at Western Michigan University in Kalamazoo, Michigan, majoring in trumpet and music education. As part of his undergraduate curriculum Alex enrolled at the Sibelius Academy in Helsinki, Finland, where he studied for a year with Timofei Dokschitzer, the celebrated Principal Trumpet of the Bolshoi Theater Orchestra.

After returning from his European study and travel, Mr. Jokipii completed his studies at WMU with a bachelor’s degree in music education. Jokipii was awarded a Master of Music degree in trumpet performance from the Juilliard School of Music and began to pursue his Doctor of Musical Arts degree. Prior to being awarded his DMA, he won the position of Principal Trumpet with the Charleston (South Carolina) Symphony Orchestra. During that time, he also performed with the Spoleto Festival Brass Quintet and the Charleston Brass Quintet and served on the performance faculty of Charleston Southern University as adjunct professor of trumpet.

Mr. Jokipii has appeared as a soloist and the 1992 and 1994 International Trumpet Guild Conferences. He also has appeared on numerous occasions as a soloist with the Buffalo Philharmonic performing Bach’s Brandenburg Concerto No. 2, Arutunian’s Concerto, Haydn’s Concerto, the Concerto for Trumpet, Piano, and Strings by Shostakovich, and Copland’s Quiet City. Away from the BPO, Alex has appeared as a soloist with the Ars Nova Chamber Musicians, the Amherst Symphony, and the SUNY Fredonia Wind Ensemble. Mr. Jokipii recorded the Jerzy Sapieyevski Mercury Concerto for Trumpet and Wind Orchestra with the SUNY Fredonia Wind Ensemble and this recording is available on Albany records. In November 2017 Mr. Jokipii performed the world premiere of Finnish composer Jaakko Kuusisto’s Trumpet Concerto. The new addition to the solo trumpet repertoire was commissioned by John and Pauline Kiltinen and written for Mr. Jokipii. The concerto was performed and recorded by the Buffalo Philharmonic in May of 2018.

Internationally, Mr. Jokipii has appeared in master classes and recitals in Krakow, Bydgoszcz, and Walbrzych, Poland with fellow BPO brass principals Jacek Muzyk and Jonathan Lombardo. Alex was also the featured soloist with the West Bend (Wisconsin) Orchestra on their tour of Scotland in the spring of 2009.

Additionally, Jokipii has performed as a guest Principal Trumpet with the Dallas Symphony, the Florida Orchestra, and the Aspen Festival Orchestra. He has also performed with the New York Philharmonic, the Helsinki Philharmonic, the Savannah Symphony, and the Rochester Philharmonic. After a nation-wide search in 1998, Jokipii was awarded the position of Principal Trumpet with the Buffalo Philharmonic. In addition to playing with the BPO and teaching privately, Jokipii is also on the performance faculty at the State University of New York at Fredonia. In his spare time Alex enjoys playing golf, attending Buffalo Sabres hockey games, and traveling with his wife, Shari.