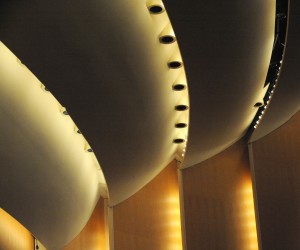 In a short three-city tour of West Palm Beach, Vero Beach and Fort Lauderdale, the Buffalo Philharmonic Orchestra showed Feb. 7 at the Kravis Center just how good they are under the baton of JoAnn Falletta, one of the fine women conductors who has made inroads into the once male-dominated maestro domain.

Abandoning the usual warm-up piece of overture or tone poem, the orchestra launched into the program with Tchaikovsky’s Violin Concerto (in D, Op. 35) with 29-year-old English soloist Chloë Hanslip. The second half of the program was devoted to Brahms’s Second Symphony (in D, Op. 73).

Composed in 1878, Tchaikovsky’s Violin Concerto is one of the most popular works in the classical repertory. Composed after his disastrous marriage of two months, Tchaikovsky wrote it after fleeing to Clarens on Lake Geneva. This deeply personal concerto has a poetic undertow influenced by Lord Byron’s epic poem, Don Juan. It vacillates from joy to sadness. It probes: now singing, now weeping, now dancing. It was an emotive leap that flowed from his pen, and the afternoon performance was electrifying from soloist and orchestra.

Wiping the sweat from her palms down her black-and-white skirt, Hanslip waited impatiently as the first and second violins opened with a lovely melody before tucking her 1737 Guarneri del Gesú instrument under her chin . A hasty, ragged attack of her first quick bars of music was disappointing. Loose horsehair from her bow caught our attention and became distracting in its continual up and down flight.

Settling down to the movement’s Allegro moderato pace she produced a nice singing tone in the slower passages. After completing a phrase, her dramatic right arm flourishes seemed a bit overdone and melodramatic. Plucked orchestral strings accompanied her lovely intonation of repeated double octave work. Taking her time with the difficult cadenza, she developed the habit of half-turning away from the audience to play to the orchestra. Returning to the slower passages, she faced front and gave a sweetly refined interpretation of a beautiful Tchaikovsky tune followed by a race to the end by soloist and orchestra. Striking a nice balance, the orchestra accompanied her violin sensitively.

In the second movement (Canzonetta), Hanslip, turning her back on the audience, became deeply involved with the orchestra’s lead chairs, intensely looking in their direction. Next she turned to look at the first violins, nodding approvingly. Her playing here was full of warmth and emotion. The finale (Allegro vivacissimo) is full of quick tempos and difficult runs, all of which Hanslip executed brilliantly. But again, when she wasn’t playing, she ogled the clarinet soloist or the oboe soloist, her back to the audience again. Spinning around, she tackled more tough runs with brio and raced with the orchestra to the finish. Wild acclaim greeted soloist and orchestra from the audience. In her encore she was joined by the new concertmaster of the 75-member Buffalo Philharmonic, Dennis Kim, in a short duo by the French Baroque master Jean-Marie Leclair.

Later in the lobby, I heard people say how well Hanslip played but that her erratic positioning was too distracting for them. Hanslip’s intellectual curiosity in trying to connect with the orchestra is understood. However, a soloist is expected to present more decorum when playing to Palm Beach audiences. Turning one’s back on them is considered a slight. A minor quibble, but soloists must take locale into consideration.

Comparisons to male conducting greats of JoAnn Falletta’s conducting style are numerous. To estimate her capabilities fairly it must be based on her current work with this orchestra, and in this case, how she interpreted the Brahms Second.

Waiting 30 seconds for complete silence in the hall, Falletta set the perfect tempo to introduce the first movement with a clear two-handed downbeat. The orchestral sound was nicely balanced, dynamics were fully rounded and attractive; this was magical music-making. Facing the eight cellos to her right at the beginning of the second movement, she drew from them a beautiful rendition of the opening theme, rich in its warmth and well-played by all. Turning to the full orchestra, Falletta opened her arms wide, and with a front to back sweep of her graceful hands, led her orchestra in a kindly, gracious mood, strictly keeping the beat as cellos sawed away and woodwinds seemingly bubbled away over them.

Only three times during this movement did she make a grand gesture, arms held high to achieve a big orchestral crescendo. Her hand movements are subtle and never overdone.

Falletta’s third movement was smooth and controlled, with the conductor keeping everything simple and delicate. The finale (Allegro con spirito) opens softly, but suddenly the orchestra bursts in with a full-throated, whirling Brahms tune, full blast. Falletta moved it along, arms flailing, with skilled precision. A thrilling melody soars over the Alpine high meadows, telling us of Brahms’s expansive joy in writing the symphony and the time well-spent on the 1877 Bavarian holiday during which he wrote it.

But just to let us know he’s in charge, he ends with a brazen blast from the brass section that Dame Edith Sitwell would describe as “vulgar.” The Kravis audience cheered and gave the Buffalo Philharmonic a standing ovation. What a fine reading Falletta gave to this symphony. Her refined, calm interpretation will be remembered for a long time to come.