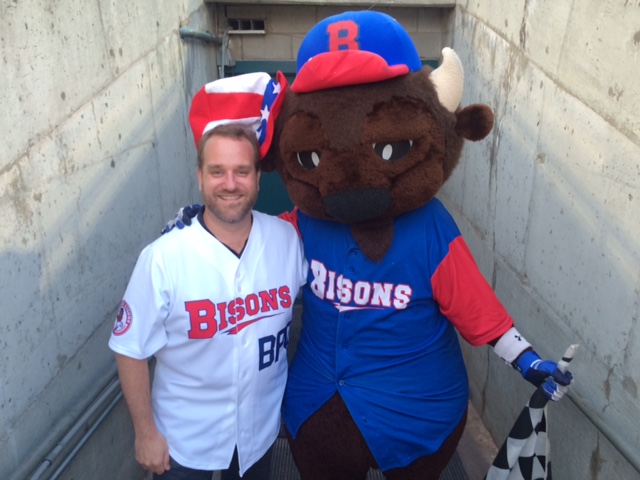 There was a time when Stefan Sanders was certain he was destined to be a National Hockey League player. He had a childhood passion for hockey and, as most kids who play sports, dreamt of a pro career.

Then he found music and a new passion developed. Sanders poured himself into it and became an internationally renowned trombonist en route to a career as a conductor. That brought the Austin, Texas, native to Western New York, first as a member of the Buffalo Philharmonic Orchestra and now as its associate conductor.

Following his artistic passion to Buffalo he was reminded of that early athletic passion.

“When I was growing up in Texas, I had to order my hockey equipment and the return label was from Great Skate on Sheridan in Amherst, N.Y.,” Sanders said. “I had no idea where that was, but when I first moved to Buffalo and drove by Great Skate I just about had a wreck.”

The partnership between athletics and the arts is unique and one that is now in its 22nd year in Western New York, bringing the Buffalo Bisons and Buffalo Philharmonic Orchestra together every July 3.

The Independence Eve celebration begins with the Herd taking on the Scranton/Wilkes-Barre RailRiders, the New York Yankees affiliate and the first-place team in the International League North Division, at 6:05 p.m. The evening continues with a post-game concert and the largest fireworks display of the season at Coca-Cola Field.

“When we first started it, we thought we’ll try it for a year,” Bisons general manager Michael Buczkowski said. “We thought we’ve got this great orchestra right here in our home town. There’s got to be something we can do as part of a game and it’s worked out great.”

Sanders played trombone with the orchestra from 1999 to 2007 and was part of this concert many times. He understands it from a musician’s perspective and has learned more about the production aspect this year, as talks with the Bisons began back in November to create this year’s show.

“They have a very clear idea of what they want,” Sanders said. “They know their fan and when it comes to this type of concert, it’s a little bit of everything. There’s patriotic music because it’s the day before the holiday, and some popular music as well – some Star Wars, some Batman, some Beauty and the Beast. There’s popular orchestra music all ages can identify with. Capitalizing on the fact it’s Independence Eve we have music to salute to the armed forces and we end with the 1812 Overture.”

Of course you end the program with the 1812 Overture. As any baseball fan of a certain age remembers, it is the music most closely associated with the 1976 cinema classic, “The Bad News Bears.”

The crowd on July 3 at Coca-Cola Field is generally a mix of people who are fans of the BPO coming for the concert and fireworks and baseball fans who are there for the game (and the fireworks). For Sanders that creates opportunity.

“As a musician, whether you’re playing or as a conductor, one of great joys is sharing what we’re passion about with people not familiar with it,” Sanders said. “We all believe if you’re exposed to it and can feel our sincerity in our music-making, you’ll understand.”

Fans will understand because there are similarities between playing in an orchestra and playing baseball. Both require a team effort, a melding together of different talents into one cohesive unit, and both speak the universal language of passion and dedication.

“Kids find their passion,” Sanders said. “For me I played hockey growing up and I thought I would be an NHL player. Then I fell in love with music and never looked back. I definitely see the similarities in all disciplines. When you become passionate about something, you devote a lot of your life to the craft of doing it and getting better and better. You become skilled and then you have the opportunity to do this for a living which is the greatest joy and reward for all that hard work whether you’re a member of the Bisons or of the Buffalo Philharmonic Orchestra.”

And the respect goes back from the clubhouse.

“I’ve noticed, especially in the last 10 or 15 years, how many of our players now come out in the dugout and want to hear it,” Buczkowski said. “I think there’s a mutual respect kind of thing. They come out and say ‘This is really good’ and they start asking questions: how many are in the orchestra, who are they, what else do they do? They want to know everything about them, kind of the same way the musicians will ask questions about the players. So at some level I think there are a lot of things that are in common.”