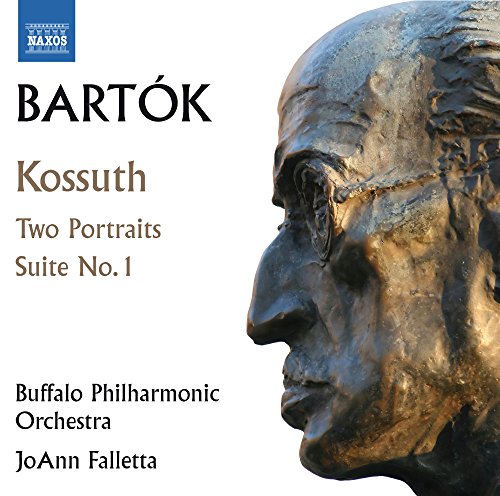 If you are unfamiliar with Bartók’s Suite No.1, then a pleasant surprise – an uplifting treat – awaits you. Composed in his early-twenties this five-movement work abounds in rollicking rhythms, generous lyricism and all is garnished with an artist’s palette of colour. Admirers of Korngold’s music, and Karl Goldmark’s Rustic Wedding Symphony, needn’t hesitate. Listening blind, Bartók’s name may not even be considered, although there are some giveaways, but on its own terms here is an exuberant, tuneful and heartfelt score to take much pleasure from. JoAnn Falletta and her Buffalo Philharmonic give an ideally vigorous, lush and affectionate account of this delightful and bracing music that can dance with earthy vigour and wear a big heart on its sleeve, the young composer inventive and imaginative, teeming with ideas, and on the cusp of becoming the inimitable and great composer we know him to be.

Bartók’s Opus 5 Portraits are more characteristic, the first movement comparable to its counterpart in Violin Concerto No.1, not performed during the composer’s lifetime and only published much later. Although that work is now given the occasional airings, the composer’s act of rescue of the opening ‘Ideal’ has long given us some of his most eloquent and deeply-felt music, a touching depiction of violinist Stefi Geyer, whom he was very much in love with. Michael Ludwig gives an intense and sinewy reading of the solo part, sensitive and poised regarding Bartók’s tear-jerking longing. The second Portrait – without solo violin and newly composed – is a rambunctious and pithy affair, intriguingly unpredictable, something of an exorcism to counter a cherished if lost relationship.

Kossuth, after statesman Lajos of that name, led Hungary in its 1848 claim for liberty from the Austrian Habsburg empire but was defeated following intervention from Russia. Bartók’s 20-minute Symphonic Poem, like Suite No.1, may not be typical of him, but it is an evocative, exciting and dramatic diary of events, from intense brooding to final desolation via urgent battle cries. JoAnn Falletta and her troops do justice to this intense score, one festooned with nationalistic motifs. As throughout, the vivid recording presents some impressive music and music-making.