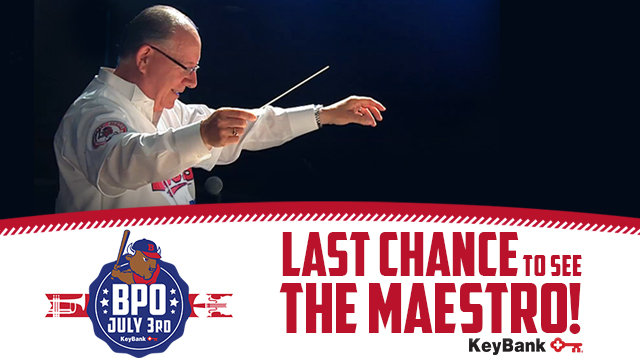 When any player retires, you immediately think of how they performed in the big games. Did they have their best when it counted most? How did they handle ‘the big stage?’

For 18 seasons, no one brought their ‘A game’ to the biggest night at Coca-Cola Field like conductor Paul Ferington of the Buffalo Philharmonic Orchestra. And this year, after what is sure to be one more amazing performances leading the BPO and Chorus at the Bisons’ KeyBank Independence Eve Celebration, the maestro is hanging up his ‘BPO’ jersey and conductor’s wand.

The July 3rd concert will also be the final in a brilliant 30-year career with the BPO that was marked by unparalleled professionalism and excellence. He chose this show because “it’s one of his favorite concerts each year.”

Ferington conducted his first Bisons Independence Eve celebration in 1998, the fourth year of the event’s now 21-year history. For nearly two decades, the Barker-native has watched the event become one of the marquee events of the Western New York summer.

“Over the years, we have created a complete family-oriented evening with an exciting ball game, amazing concert, breathtaking fireworks, and important educational lessons about our U.S. history,” said Ferington. “There are very few activities around that offer such a broad spectrum of education and entertainment.”

The passion he has for the event is evident when you hear Ferington speak. In 18 years, he never took a fee for the show, donating all his time and services without compensation. When one Independence Eve was done, it was quickly time to look at how it could be built on the following season.

“I started gathering ideas for next year’s concert on July 4…the day after the current year’s concert finishes! I looked for important anniversaries and historically significant events that should be observed. Then, I had the task of finding appropriate music to accompany these observances.”

One of lasting impressions Ferington has left on the event is the introduction of the Armed Forces Salute during his first show in 1998. The arrangement includes the anthems of each branch of the United States Armed Forces during which Ferington asks the retired and active duty members in attendance to stand and be recognized when their theme plays. This medley has grown to be one of the most significant and most anticipated moments of each year’s show.

“I never image it would become a yearly tradition. The response to having members of each branch stand to be recognized was unbelievable in 1998.

“Our men and women who have served deserve the few minutes of applause and cheers they receive as “celebrities” that evening!”

Ferington admits that he doesn’t “handle departures well” and knows this year’s show will be a tough one for him. Like in many areas of the ballpark, the friendships that have been built through the years together are what make Coca-Cola Field so special…but they are also what will be missed the most.

“Working with Jon Dandes, Mike Buczkowski, Matt La Sota and Tom Burns at the Bisons…they have become beloved friends and I have cherished working with them. They are consummate professionals dedicated to insuring the highest quality evening for the fans! I will miss their enthusiasm, dedication, and of course, their insane sense of humor!”

What Ferington is looking forward to is having more time to spend with his three granddaughters, what he calls the “best job ever!” By cutting out traveling to the city from his home on Lake Ontario, he also is excited to have the time to get back to doing more composing and arranging. He plans on continuing to teach for SUNY Buffalo State, but with online courses.

But we know the July 3rd concert won’t be far from his thoughts. Even in his departure, Ferington decided to announce his retirement now to give the Bisons and the Buffalo Philharmonic plenty of notice to find a conductor for the 2016 show.

And while this show has meant so much to Ferington personally in his wonderful career, it has meant just as much to the hundreds of thousands of Bisons fans that have celebrated Independence Eve at the ballpark. You could say, that because Paul Ferington continually came through with one amazing performance after another on the big stage, that he may just be as recognizable by fans as any retired Bisons player in the history of Coca-Cola Field.

“I am incredulous at this thought…I am in total disbelief,” admitted a slightly overwhelmed Ferington.

What’s even tougher to believe, is this event without him.