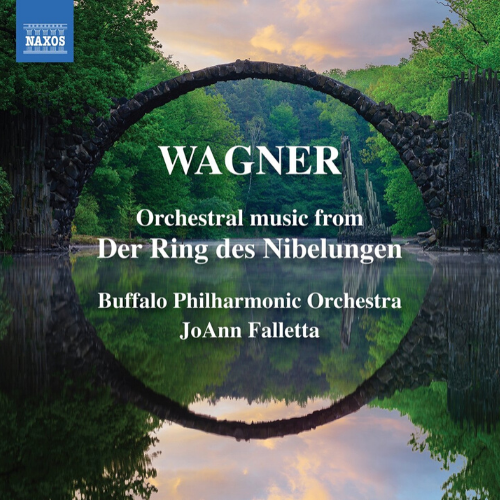 Wagner, Orchestral Music from “Der Ring des Nibelungen” performed by Buffalo Philharmonic Orchestra conducted by JoAnn Falletta (Naxos). If you take an historical overview of the Buffalo Philharmonic Orchestra you have to conclude that no BPO conductor has achieved anything close on record with the orchestra to the recording presence that Falletta has. Foss’ avant-garde influence on the BPO was profound on the orchestra and the city, but the recordings he produced weren’t. Michael Tilson Thomas’ decision to use the  BPO to record the complete music of Carl Ruggles was the BPO’s most consequential recorded moment, along with its recording of Terry Rley’s “In C.” But you could argue that the BPO’s records for Naxos have been the fulfillment of the orchestra conducted years ago by Steinberg and Krips. It’s Naxos’ marvelous insistence on using the BPO for “big” works with a “big” orchestral sound are making every new disc a potential wonderment. They aren’t all on the level of the BPO’s version of Gliere’s “Ilya Murometz” Symphony no. 3 (probably the orchestra’s most arresting performance on record), but this is a work of immense musical substance performed by the orchestra with the sonic size and authenticity one could hope for. The significance can’t be overstated. Wagner’s “Ring” cycle requires, from listeners, an investment of time and dedication hard to come by in the digital age. To hear so much of its wonderful music, this one disc Falletta anthology of Wagner’s “Ring” sans voices presents a near-perfect distillation for novices of the genius of a composer who was a historical horror in countless ways (racial, personal) but, undeniably one of the most sublime who ever lived along with it. ★ ★ ★ ★