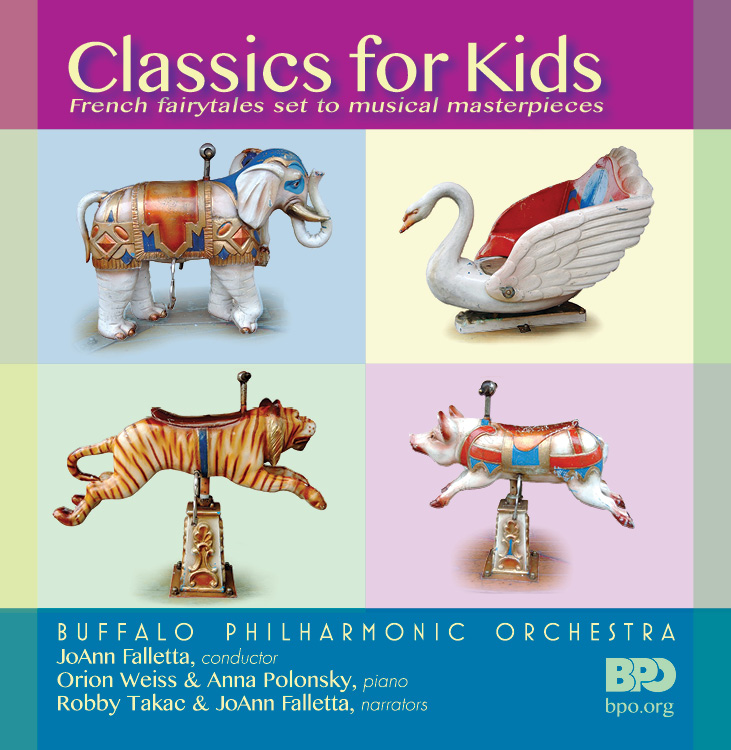 The new disc, set for release Tuesday on the BPO’s private label, could be part of an international trend. Also new this season is a Deutsche Grammophon disc called “Peter and the Wolf in Hollywood,” with kids’ classics performed by the National Youth Orchestra of Germany and narrated by rocker Alice Cooper.

The BPO recording, though, taps into a wellspring of local pride. Buffalonians rejoice in the success of both the BPO and the Goo Goo Dolls.

“We’ve just talked about it for a long time,” Hart said. “Of all the CDs we have, we haven’t had one to address the children. And that’s a big part of what we do, playing for families and children, It’s something we’ve always been interested in.”

The music on the CD was all recorded live at Kleinhans over a number of years.

So new is the CD that as of press time, neither Hart nor Takac had heard the finished product. Only Falletta had. On the phone, she seemed not only happy with it but also thrilled.

“I’ve never had the chance to work with a rock star before,” she said.

Reached in Los Angeles over the weekend, Takac also seemed thrilled. He also admitted he participated in the project long-distance. His collaboration with Falletta, he said,, took place mostly in cyberspace.

“We’ve mostly been corresponding over email,” he said. “It loomed into a sort of bigger conversation. I’ve always admired what’s been going on there at the BPO,” he said. “It’s become a really great opportunity.”

He said he recorded some of his narration in Buffalo and some of it on the road.

“It was just me sitting in a hotel room for about four hours reading a story,” he said.

Takac, who has a young daughter, looked back on his own childhood as he read “The Sorcerer’s Apprentice.” He also fondly recalled the Disney film “Fantasia,” in which the hapless apprentice was played by Mickey Mouse.

“That was a big part of my life growing up,” he said. “As I was reading the story, it was kind of cool to have those kind of optics in my mind.”

“We can only hope,” Hart said with a laugh.

Takac, too, is open to new possibilities.

“Symphonic music entered my life in a really interesting way,” he reflected. “As a kid it was the Rolling Stones, Black Sabbath, Kiss. I loved that when I was a kid. I wasn’t exposed to a whole bunch of classical music.”

Eventually, though, his work with the Goo Goo Dolls led him in that direction.

“After 15 years putting albums out, we started to write music that lent itself to being enhanced by symphonic elements. So slowly things started to enter into our world. The first thing we ever did was pretty much a full orchestra here in Los Angeles. A composer named David Campbell who’s pretty notable.” Campbell, a Toronto native, has successfully melded rock and classical and worked with such artists as Justin Timberlake and Adele. “My eyes were really kind of opened up,” Takac said.

“I probably should have discovered much earlier when I was a kid,” he added. “To me it’s sort of a new world. I have a couple of friends back home really into the classical music. They turned me on to some pretty cool stuff – Lang Lang, Rachmaninoff.

“The older I get, the more curious I am.”