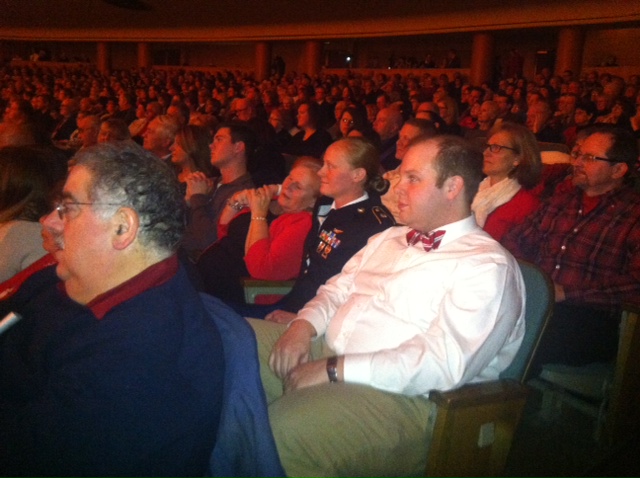 One family’s musical tradition became a memory of a lifetime when an Army sergeant who was stationed abroad for years appeared at a Buffalo Philharmonic Orchestra concert Saturday night.

The unexpected twist occurred after the orchestra finished a rousing rendition of the Deck the Halls during the annual Holiday Pops concert in Kleinhans Music Hall. Conductor Ron Spigelman made an announcement.

“We have a special package that has come a very long way from one of the members of our military,” he told the crowd.

That’s when BPO Marketing Director Susan Schwartz escorted Amherst resident Mary Beth Bauman-Moyer to the stage. Seconds later, the woman’s 27-year-old daughter appeared on stage. Katie Bauman had been working with Schwartz for months to pull off the surprise.

What was the mother’s reaction?

“Oh my God, it’s my daughter,” Katie Bauman recalled her mother saying as they hugged to thunderous applause from an audience that gave them a standing ovation.

The Army sergeant has been stationed abroad for the past four years and missed spending Christmas with her family for all but one of those years. She recently returned from Afghanistan and is now stationed in Fairbanks, Alaska.

The on-stage reunion was a bit “nerve-wracking,” the flight medic conceded.

“Deployment was a lot less stressful than walking out on that stage, I can tell you that. But being back with my family is great, especially at the pops concert. It has been a family bonding event for years.”

In an interview with WBFO, Bauman urged people to remember the troops.

“That’s the one thing I realized in Afghanistan. If it’s not on the front page, people forget about it. So just remember them,” she said.

Being away from family during deployment underscores the true meaning of Christmas, said Bauman, who is a graduate of Sweet Home High School and Canisius College.

“It’s about family. It’s not about presents,” she said.

Mary Beth Bauman-Moyer was too overwhelmed by the surprise to chat, but one of the sergeant’s four brothers who attended the concert said the family was stunned.

“I had no idea. I was totally blown away,” said Buffalo resident Pat Moyer. “I came here tonight thinking that I was just going to listen to some music. I got a lot more. It was awesome.”