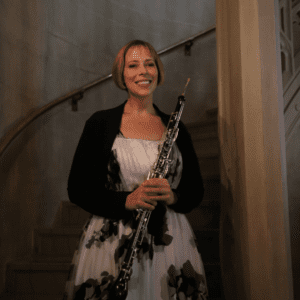 Hailed as “virtuostic” by the Buffalo News, Ms. Mattix has appeared as soloist with the BPO on many occasions.  Solo recording credits include The Swan of Tuonela by Jean Sibelius part of The Essential Sibelius release by Beau Fleuve in 2014 and Vox Humana by Rob Deemer, a work dedicated to Anna and premiered by BPO in 2016. Vox Humana appears on Built for Buffalo 2, Beau Fleuve, 2018. Anna has also appeared several times by invitation at the International Double Reed Society Annual Conference and has been a featured clinician for many Colleges and Universities. In addition to her work with the Philharmonic, Anna performs locally with the Buffalo Chamber Players, the ARS NOVA musicians and teaches at Buffalo State College and Canisius College. She is also a founding member of the Can-Am Trio in collaboration with Sarah Hamilton (SUNY Fredonia) and Geralyn Giovannetti (Brigham Young University)

Anna, in addition to her performing schedule, has always been a passionate educator and advocate for community engagement. As a graduate student Anna was awarded the prestigious ELM and IVY Award from Yale University for her outreach work in the greater New Haven Community where she developed a mentorship program between graduate students and New Haven Public Schools that continues to this day.  In Buffalo, Anna has continued her outreach efforts as a member of the BPO's Education Committee.  She is a featured Teaching Artist for BPO and has created a diverse selection of programs for schools, libraries and community centers. She is committed to making music accessible for all in Western New York and using the universal language of music to help create communication in communities.