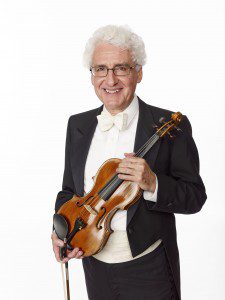 Ansgarius Aylward, Assistant Concertmaster of the Buffalo Philharmonic Orchestra, Music Director of the Canisius College Chamber Orchestra and newly appointed Conductor of the Greater Buffalo Youth String Orchestra received his Bachelor of Music degree from New England Conservatory and his Master of Music degree from Yale University, School of Music where he studied violin with Broadus Erle (leader of the New Music and Yale Quartets) and conducting with Gustav Meier.

Mr. Aylward’s early professional career included the Norfolk Chamber Music Festival, Tanglewood Festival, New College Music Festival in Sarasota, Colorado Philharmonic Orchestra and the Montreal Symphony Orchestra. In 1973 Michael Tilson Thomas invited him to join the Buffalo Philharmonic Orchestra. He was appointed Assistant Concertmaster by Music Director Julius Rudel in 1982. With the BPO, Mr. Aylward has appeared as soloist multiple times, performing both standard concerti and 20th century works. He has been Concertmaster of the Ars Nova Musicians’ Chamber Orchestra and has appeared annually for many years as soloist on the popular “Viva Vivaldi!” Festival.

Prior to his appointment as Music Director of the Canisius College Chamber Orchestra, Mr. Aylward served as Music Director of the Greater Buffalo Youth Orchestra. During his tenure the GBYO initiated a series of cross-border exchange concerts with the St. Catharines (Ontario) Youth Orchestra, started the GBYO Music Camp, began the GBYO Piano Concerto Competition, made two educational videos and was showcased on various TV broadcasts including a John F. Kennedy commemorative program on “CBS Sunday Morning” with Charles Kuralt. In the 1970s and 80s, Mr. Aylward was the leader and founding member of the Nichols String Quartet. Since 1987, he has been guest soloist and recording artist with the Stuttgart Musik Forum in Germany. In 2001, he founded the critically-acclaimed “Chamber Music on Elmwood” Festival for which he served as Director and principal violinist. During the summer months, after teaching at the Bravo Chamber Music Workshop with his colleagues from “Chamber Music on Elmwood” and the BPO, Mr. Aylward enjoys chess, mathematical games and hiking in Acadia National Park.