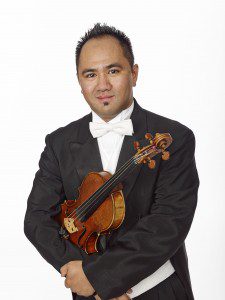 Canadian violinist Antoine Lefebvre was appointed Principal Second Violin of the BPO in September 2001 by Music Director JoAnn Falletta. Showing an early interest in music, he began his violin studies at age 5. At 13, he was admitted into a special Bachelor of Music program at the University of Montreal under the direction of J.F. Rivest and Vladimir Landsman. He completed his studies at McGill University, obtaining a Master's Degree in Violin Performance with Yehonathan Berick. He subsequently completed a music fellowship program sponsored by the Quebec Government under the direction of Richard Roberts and Andre Roy. Beginning in 1992, Antoine spent five summers at the Meadowmount School of Music, studying with Stephen Shipps. During the summer of 1999, he worked at the Kent Blossom Chamber Music Festival in Ohio where he received the Joseph Gingold Award. In 2000 – 2001, he performed in Breckenridge Colorado as the Principal Second Violin with the National Repertory Orchestra under the directorship of Carl Topilow. Antoine has won several competitions including those held at the National Music Festival and Czech and Slovak Music Festival. In 1998, he won the second place for all categories in the International Stepping Stone of Canadian Music Competition. He was also honored in Ottawa by the Governor of Canada for winning first prize at the "National Youth TV Achievement Award '95." For many years, Antoine has been invited for concerts broadcasted by CBC Radio-Canada. He has appeared as soloist with many professional orchestras, such as the Montreal Contemporary Orchestra, Orchestre Metropolitan of Montreal, Mount Royal Symphony and Laval Symphony. In Buffalo, Antoine has been featured by the BPO and Ars Nova.