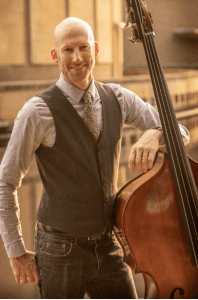 Double bassist Brett Shurtliffe is the Associate Principal with the Buffalo Philharmonic Orchestra. Brett received his Bachelor of Music degree and the prestigious Performer's Certificate from the Eastman School of Music, where he studied with James VanDemark, and his Master of Music degree from Duquesne University, where he studied with Jeffrey Turner. In 2003, he was the only American Prizewinner at the International Society of Bassists Solo Competition, and two years later, took 1st prize at the ISB Orchestral Competition. Other honors include 1st prize PADEASTA Solo Competition, and Top Honors for Double Bass at the National ASTA Solo Competition. Since joining the Buffalo Philharmonic Orchestra in 2007, Brett has appeared numerous times as a soloist with the BPO, as well as with the Amherst Symphony, the National Repertory Orchestra, and the orchestra of SUNY Cortland. In 2001, he was co-creator and soloist in Heresy, a new music concert conducted by Rochester Philharmonic’s Jeff Tyzik.

Brett’s playing has been described as “immaculate” in a 2012 Bass World review, and “Not even Johann Sebastian shredded as hard as this guy” were the accolades from an imaginative recital at a downtown Buffalo night club in 2012. His recital engagements have taken him to many unique venues across the U.S. and Canada. Before joining the BPO, he performed with the Chautauqua, Erie, Detroit and Pittsburgh Symphonies. Apart from performing, he has commissioned new works for the double bass, as well as creating numerous transcriptions of his own including Bazzini's Round of the Goblins, Kabalevsky’s 1st Cello Concerto, and Sarasate’s Zigeunerweisen. Brett has served as Adjunct Professor of Double Bass at The Eastman School of Music, SUNY Fredonia, and Grove City College. Along with his current private studio, he serves as Adjunct Professor of Double Bass at Canisius and Houghton Colleges, and is on faculty at the International Festival Institute in Round Top Texas. He currently resides in Boston NY with his wife Andrea and their two daughters Madelyn and Ashlyn.