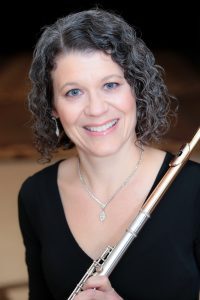 Christine Bailey has been the principal flutist of the Buffalo Philharmonic Orchestra since 1995. A graduate of the Cleveland Institute of Music, she has also performed as guest flutist with the St. Louis Symphony and Erie Philharmonic.

Ms. Bailey  has been performing around the Buffalo area as both soloist and ensemble player since she was 11 years old. After soloing with the BPO on two daytime youth concerts in 1990, she made her professional debut in 1992 at age 18 as soloist with New York City chamber orchestra Philharmonic Virtuosi at Artpark in Lewiston, NY. She has also performed as soloist with Ars Nova Musicians, and Amherst Symphony.

After two performances of Carl Nielsen's Concerto for Flute and Orchestra with the BPO in 1997, the Buffalo News called her playing "immaculately accurate, but with a winning, casual, often jaunty approach to phrasing, while extremely complex runs and ornamentations seemed artlessly simple, beguiling sculptures of sound."

Ms. Bailey has performed on almost a dozen studio and live recordings with the BPO. After the BPO's release of Rhapsodie, a disc of French music, the American Record Guide said that her solo in Ravel's Daphnis et Chloe Suite 2: "… is one of the sweetest and most touching ever captured on records".

Christine commissioned Tracing Mississippi, a concerto for flute and orchestra, from American Indian composer Jerod Impinchchaachaaha Tate, and performed the world premiere with the BPO in 2002. The performance was named in the Buffalo News' top ten concerts of 2002. She recorded the concerto in June 2007 with the San Francisco Symphony. The disc was released on Thunderbird Records, a new label dedicated entirely to American Indian music.

In 2017, she released her first book, The No-Nonsense Guide to Becoming a Professional Flutist .