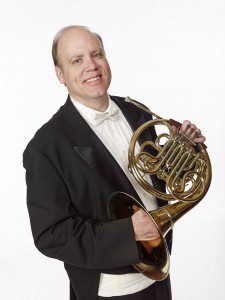 Daniel Sweeley was appointed Second Horn of the Buffalo Philharmonic Orchestra in 2000. A native of Lansing, Michigan, he served six years as Second Horn in the Dayton Philharmonic Orchestra prior to his appointment in Buffalo. He holds degrees in Horn Performance and Music Education from The University of Michigan and a Masters degree in Horn Performance from the University of Cincinnati, College-Conservatory of Music. His primary teachers have included Louis Stout, Lowell Greer, Roland Pandolfi, Marie Speziale, Michael Hatfield and Randy Gardner.

Mr. Sweeley has performed with the Cincinnati, Louisville, Jacksonville, Syracuse and Chautauqua Symphony Orchestras. Sweeley was a featured guest artist at the 2001 Northeastern Horn Workshop in Hartford, CT. He was a prize-winner in the 1994 American Horn Competition University Division. He has held teaching positions at the University of Dayton and SUNY Fredonia and has given Master Classes around the US. He currently serves as an Adjunct Faculty member at Buffalo State College and serves as the BPO’s ICSOM delegate. His interests outside of music include Detroit Tigers baseball, Michigan football, all forms of auto racing and Great Lakes marine photography. He resides in Lake View, NY with his wife Sandy, a band director at Hamburg MS, and their cat Lily.