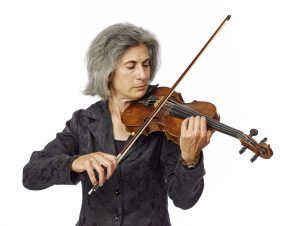 As a child, Deborah Greitzer spent afternoons playing with blocks while her mother taught piano lessons. She fell asleep to the piano music of Beethoven, Schubert, Brahms, and Scarlatti. Her father taught music at Morris High School in the Bronx and became supervisor of music in the New York City public school system. He also taught and was an administrator at the Manhattan School of Music.

Deborah began formal piano lessons with her mother and violin lessons with local teacher, Sidney Polivnick. When she was 14, she began studying violin with Dorothy Delay, who suggested that she audition for Juilliard. She studied with Miss Delay at Juilliard and at Sarah Lawrence College. During her high school and university years, she spent summers at the Meadowmount School of Music, Eastern Music Festival, Ventnor Music Festival, North Carolina Summer Session in Siena, and the Spoleto Festival of Two Worlds. She also played in the Jeunesses Musicales Orchestra Mondiale and the fellowship orchestra at the Berkshire Music Center. She received a scholarship from Public Action for the Arts to study at the Summer Festival in Lenk, Switzerland.

After graduation from Sarah Lawrence, Deborah studied with Oscar Shumsky and auditioned for the Buffalo Philharmonic Orchestra. She was hired by Michael Tilson Thomas in 1973.  Once in Buffalo, Deborah earned her MFA at the State University of New York at Buffalo, studying with Don Weilerstein.

While earning her MFA, Deborah became interested in early music and studied baroque violin and performance practice with Stanley Ritchie and Marilyn McDonald. For a number of years, she performed with baroque groups in Toronto, at Oberlin College, and around New York State with the Genesee Baroque Players. She also performed with baroque guitarist, June Yakeley in London, England.

Her work with refugees made her interested to see the places where some of her clients originated. For over ten years, she spent her free time teaching violin at l'Ecole de Musique Dessaix Baptiste in Jacmel and Sainte Trinite' in Port au Prince, Haiti. While in Haiti, she met and performed with musicians from around the world, which led to teaching and performing in Cuba for Centro Nacional de Escuelas de Arte as well as teaching in Curacao and Peru. Under the auspices of the Center for World Music, she performed Lou Harrison's Concerto for Violin, Cello, and Javanese Gamelan in Indonesia and at Bates College in Maine. As violinist in the Arcadia Trio from 2008 to 2015, she spent several seasons in Thailand with teaching/performing residencies at Rangsit University in Bangkok and Payap University in Chiangmai. The Arcadia Trio also performed a program of contemporary works by Asian composers at the 2015 Thailand International Composition Festival at Mahidol University.  The group has also performed around the United States and in Canada.

Deborah played several concerts for Music for Life International, an organization that performs concerts to raise funds to provide humanitarian relief. In 2014, Music for Life International sent her with a string quartet to teach Syrian refugees at Za'atari Refugee Camp in Jordan. The quartet also did master classes and performed for the Palestine Youth Orchestra and the Jordan National Music Conservatory in Amman.

More recently, Deborah has played recitals in the Buffalo area and in Fort Erie, Ontario.