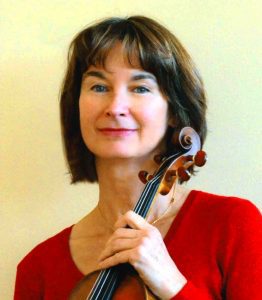 Diana Sachs is well-known in Western New York as a chamber music player and first violinist with the Buffalo Philharmonic Orchestra. She has performed as the featured soloist with the Buffalo Philharmonic many times, playing such works as Sarasate’s Zigeunerweisen, Lalo’s Symphonie Espagnole, and Stravinski’s L’Histoire du Soldat with Maestro Eiji Oue, Mozart’s Adagio and Rondo with Maximiano Valdez and Vivaldi concertos with resident conductors Arie Lipski and Ron Spigelman. She has also played many Vivaldi concertos on the Ars Nova Chamber Orchestra’s “Viva Vivaldi” series, and recently two of the “Seasons” by Piazzola with the Camerata di' San Antonio Chamber Orchestra.

A native of Denver, Colorado, Ms. Sachs began her violin studies at age 9, receiving lengthy daily violin lessons from her mother in addition to her regular lessons. She received a BFA in music from Stephens College and a Master’s Degree from Indiana University, where she studied with Josef Gingold and Ruggiero Ricci. Further studies with Ivan Galamian at Meadowmount School of Music supplemented summer programs at Blossom Festival and Colorado Philharmonic. Ms. Sachs has taught at Kinhaven Music School in Vermont, and performed at the Grand Teton Music Festival in Wyoming. Diana has been a member of the Buffalo Philharmonic’s first violin section since 1976.

Chamber music is her first love, and Diana is founder and first violinist of the Philharmonic Quartet, which has appeared frequently in concert on several chamber music series in Western New York.