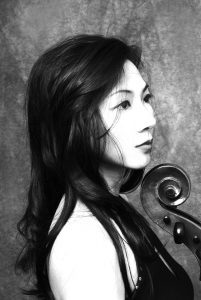 Praised by the Buffalo News for her “top-notch”, “ravishing”, “joy to hear” performances, cellist Feng Hew has distinguished herself with “deep and warm tone with rich resonance.” Ms. Hew has been the Associate Principal Cellist of the Buffalo Philharmonic Orchestra since 1999, appointed by conductor JoAnn Falletta.

Ms. Hew has made the world premiere of “Whistler Waves” for cello and orchestra, which was commissioned by the BPO and written for her by composer Caroline Mallonee. The performance of the piece with BPO, under the leadership of JoAnn Falletta, was recorded in the recent BPO CD release “Built for Buffalo 2”. It has also been broadcasted on Fred Child's “Performance Today” and hailed as “formidable playing!” by Fanfare Magazine. Ms. Hew subsequently commissioned another Mallonee work, “Portraits of Andromeda” for Cello and String Orchestra, premiered by the Camerata di Sant’ Antonio to a warm and enthusiastic reception. As an advocate for new music, she has commissioned and will premiere a cello concerto "Zhulong" by composer Alice Hong in 2020.

Prior to joining the BPO, she worked extensively with Yo-Yo Ma and Emmanuel Ax at the Irving Gilmore International Music Festival. She has performed both in the U.S. and abroad, in Japan, Singapore, Hong Kong, Taiwan, and Canada. Conductors under whom she has worked include Yehudi Menuhin, Seiji Ozawa, Michael Tilson Thomas and Simon Rattle. She is frequently the featured soloist with Buffalo musical organizations such as the Buffalo Philharmonic Orchestra, Ars Nova Chamber Orchestra, and the Amherst Symphony. Ms. Hew has also appeared in a number of Western New Yorkpremieres with the Camerata di San't Antonio. And she actively performs with the Buffalo Chamber Players, A Musical Feast, and the Philharmonic String Quartet.

A native of Taiwan where she studied music as she grew up, she accrued recognition and prizes, and eventually came to study at the New England Conservatory of Music in Boston where she received her Bachelor and Master degrees, as the recipient of a prestigious full scholarship.