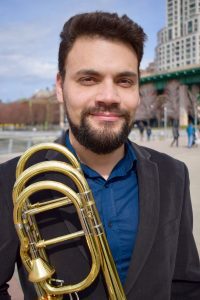 A native of Curitiba, Brazil, bass trombone player Filipe Pereira joined the BPO in the fall of 2019. First influenced by his parents who were also musicians, he began his musical studies at the age of 12. Filipe studied with Silvio Spolaore at the Escola de Música e Belas Artes do Paraná (School of Music and Fine Arts of Paraná), Fernando Chipoletti at the Music Academy of the São Paulo State Symphony Orchestra, and most recently, with Blair Bollinger at The Juilliard School. In 2016, he won first prize in the solo competition of the Projeto Bone Festival in São Paulo, and in 2017, he was the winner of the Maestro Eleazar de Carvalho Competition, also held in São Paulo. He has participated in music festivals in both Brazil and the United States, including Campos do Jordão International Music Festival, São Paulo and the National Repertory Orchestra Summer Musical Festival in Colorado. Filipe has performed with a number of orchestras in Brazil, Mexico, and the United States, including the São Paulo Symphony Orchestra, Jalisco Philharmonic Orchestra, Princeton Symphony, American Ballet Theatre, and the Mostly Mozart Festival at Lincoln Center in NYC. Although his training focused primarily on orchestral playing, Filipe served as a bass trombone player for the Military Police Band in Paraná, Brazil, for 6 years before moving to the US in 2017.