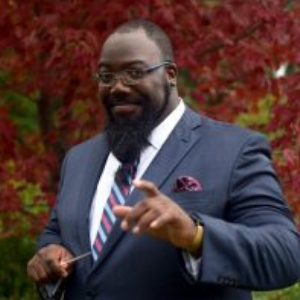 Jaman E. Dunn is currently the Assistant Conductor with the Buffalo Philharmonic Orchestra, Artistic Director of the Buffalo Master Chorale, and the Founder and Music Director of the Polaris Orchestra. A native of Chicago, IL, he attended The Ohio State University for his undergraduate studies, earning a Bachelor of Music in Vocal Performance under the study of Dr. C. Andrew Blosser. Mr. Dunn earned his Master of Music in Orchestral Conducting, under the instruction of Maestro Bruce Hangen at The Boston Conservatory at Berklee.

In addition to his orchestral activities, Mr. Dunn has also maintained a vocal career which began during his time in central Ohio. With a strong focus on oratorio and sacred music, Mr. Dunn has been Bass Soloist for performances of the Requiems of Mozart and Verdi, Handel’s Messiah, Gounod’s St Cecilia Mass, Schubert’s Mass in Eb; Jesus in Bach’s St. John Passion; and Baritone Soloist in Carmina Burana. He has also been a part of opera productions including Falstaff, Il Barbiere di Siviglia, La Bohème, La Traviata, Cavalleria Rusticana, and Die lustigen Weiber von Windsor.

In his professional capacity, it is Mr. Dunn’s continued goal to raise awareness of African-American performers in classical music at all levels and in all mediums.