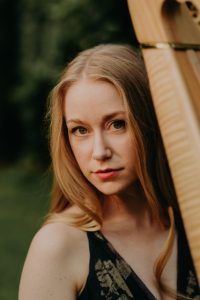 Praised for her "wonderful musical sensibility," Madeline Olson is the principal harpist for the Buffalo Philharmonic Orchestra. In 2019, she was awarded a career grant from Salon de Virtuosi, in 2017, she was the first American to be awarded first prize at the Nippon International Harp Competition in Soka, Japan, and is a laureate of many other competitions, including the 2016 Aspen Music Festival Harp Competition. Madeline regularly works with composers to promote the expansion of the harp repertoire, and has premiered a number of solo and ensemble works featuring the harp. A five year participant in The Juilliard School’s Focus! Festival, in 2018 she performed the Western Hemisphere premiere of Cinq stades de l’existence for solo harp by China’s Yao Chen, and as part of Juilliard’s 2019 Commencement ceremony, Madeline performed Kaija Saariaho’s Fall for harp and electronics, to commemorate the composer’s awarding of an honorary doctorate. Madeline has been heard as a soloist with the Modesto Symphony, Merced Symphony, Young People’s Symphony Orchestra, and Modesto Symphony Youth Orchestra. She has received both her BM and MM degrees from The Juilliard School under Nancy Allen, and her other teachers include Linda Wood Rollo and Laura Porter.