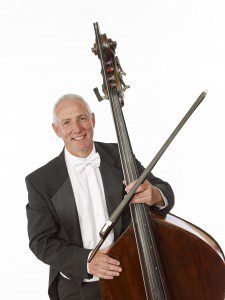 Michael Benjamin Nigrin is a musician and music composer at large who has scored the music for numerous independent and experimental films and is a double bassist with Buffalo Philharmonic Orchestra.

Born in Halifax, Nova Scotia, he was completely self taught in the jazz/rock fusion style playing the electric bass up until age 17, after which in preparation for college took up the double bass with teacher David Izenzon, and Jules Hirsh. After a two-year preparation at Brooklyn College's Music Program, he transferred to Carnegie Mellon University under scholarship to study with bass teacher Anthony Bianco where he completed his B.F.A.. Subsequently, he auditioned for and received scholarship to study with Homer Mensch and Eugene Levinson at the Juilliard School in Manhattan, New York for an M.F.A..

After graduating , he accepted a position as Principal Bassist with the New Orleans Symphony with conductor Maxim Shostakovich. As financial hardships plagued the symphony in New Orleans, Mr. Nigrin accepted a position as Principal Bassist in Florida with the Florida West Coast Symphony, where he performed for two seasons. Subsequently he returned to New York State to perform with the Buffalo Philharmonic. In addition to the Buffalo Philharmonic, as of 2006 he accepted part-time employment during the winter months with the Sarasota Orchestra.

While at Carnegie Mellon University , he double majored in music composition with mentors Marlyn Taft Thomas and Spanish composer Leonardo Balada, where he composed his works for movies, and small ensembles. In 1993, he scored a political documentary entitled "Double Justice: Race and Capital Punishment" which was played before members of the United States Congress.