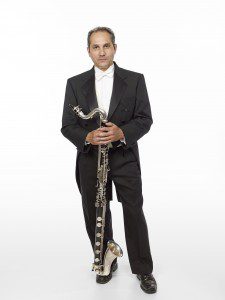 In the worlds of classical music and jazz, crossover versatility is rarely found in a single individual. Over the past decade, however, the Buffalo Philharmonic Orchestra has witnessed the keen achievements of one of Buffalo's native sons in the person of Salvatore Andolina, who is now the BPO's hottest switch-hitter in his permanent position of clarinetist, bass clarinetist and saxophonist.

While Andolina has been a full-time member of the BPO for the past 21 seasons, his association with the Orchestra began in the late '70s when he was a standout performance major at the University at Buffalo as a full-scholarship student on the clarinet. Upon completion of his degree at UB under former BPO clarinetist James Pyne, Andolina pursued advanced clarinet studies with Stanley Hasty at the Eastman School of Music in Rochester and coaching with the legendary Benny Goodman in New York City.

In addition to appearing as a soloist with the BPO, Andolina has been featured with the Rochester Philharmonic, the Grand Rapids Symphony, the Fresno Philharmonic, the Arts Nova Chamber Orchestra and the North American New Music Festival. More significantly, Andolina has been featured on at least 15 studio recordings, including his prized CD: "Like Benny to Me," a tribute to Goodman.