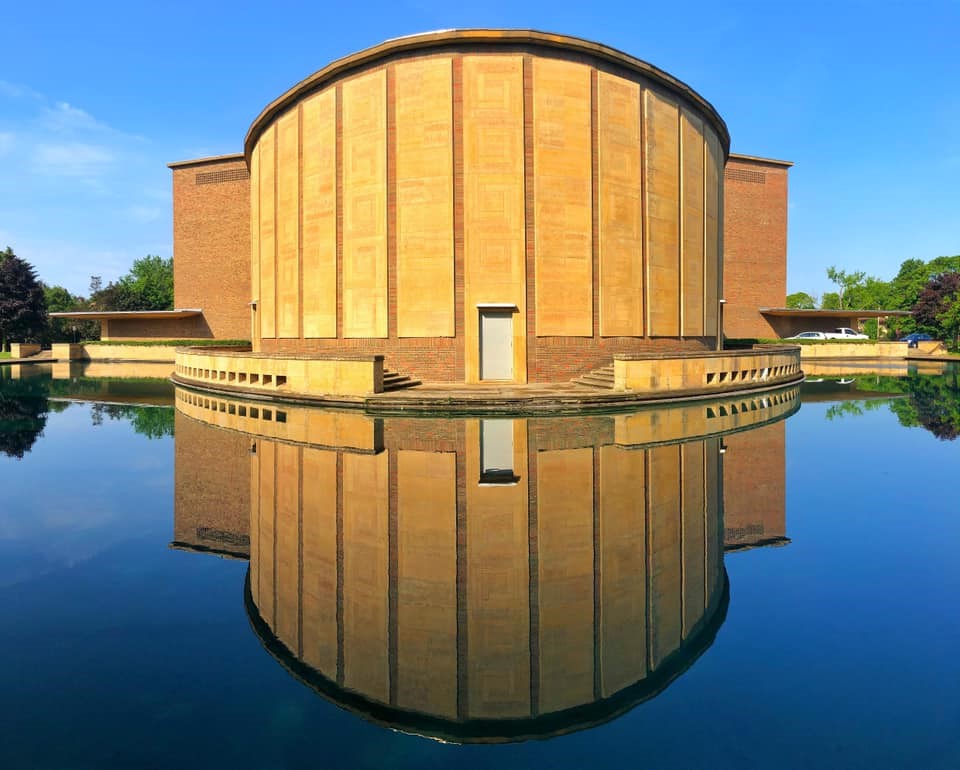 It is hard to imagine Kleinhans Music Hall without the reflecting pool wrapping around the exterior of the Mary Seaton Room. It is such an important and recognizable staple of Buffalo’s architecture that completes the work of art that is Kleinhans. I moved to Buffalo in 2014 and began working for Kleinhans in the summer of 2016. To me, it seemed like the pool had always been there, exactly the way it is today. Come to find out, the pool has seen several evolutions in its near 80-year history.

The construction of Kleinhans was completed in 1940, very shortly before its grand opening on October 12. At the time, the reflecting pool was about three feet deep, making it a magnet for recreation. Neighborhood kids would often swim in the pool during the warmer months and use it as an ice rink in the winter. (It was also used as a convenient outlet to discharge garbage or unwanted furniture.)  In 1941, shortly after Kleinhans opened, a two and a half year old boy fell into the 3-foot deep pool and died shortly after the incident. This terrible accident coupled with the burden of maintaining the pool from vandals led the City of Buffalo to pour 800 cubic yards of gravel into it, reducing the depth to only one foot.

Photo showing an empty reflecting pool at its originally intended depth during construction.

Unfortunately, the gravel still did not resolve its problems. Insurance records detail rocks being thrown through the large windows of the Mary Seaton room, the rocks presumably coming from the gravel-filled pool. The gravel also made cleaning the pool much more difficult. In 1946, the pool was resurfaced, maintaining the depth of one foot.

The reflecting pool being used for winter recreation.

Many people see the reflecting pool as a beautiful accent to the building. It was as important to Finnish-American father and son architect duo Eliel and Eero Saarinen’s design of Kleinhans as the building itself. The exterior curve of the pool connects with the exterior lobby doors on either side of Kleinhans. When viewed from above, the pool completes the overall shape of the building’s exterior, completing the Saarinen’s design as seen below:

An early drawing of Kleinhans from directly above. The reflecting pool is at the bottom, surrounding the smaller curve of the Mary Seaton Room.

It seems to be a rather frequent question, why a pool has been designed in connection with the Kleinhans Music Hall.

Well, doesn’t water have a rather commonly felt attraction? Really, there is something enigmatic in this attraction, for all people, young and old, and animals alike, like to linger near water and to look into its waving and reflecting mirror. There is life underneath this mirror, life that seems strange to our eyes when looking down there and from there discerning other eyes looking at us- wondering. And there is reflection on this mirror, reflection of life that surrounds us, there is glimmer and glitter of our own life, there is sparking of color and sunlight. Hence we are eager to erect our house near water, near lakes, rivers and brooks. Hence we like to decorate our gardens with pools and sprinkling fountains.

Lighting for the pool and exterior of the Mary Seaton room was much different than we see today. Stanley McCandless, lighting consultant for Kleinhans, created lights that stood along the exterior of the pool and beamed light across the water onto the exterior of the Mary Seaton Room. Stanley described that the purpose of these lights was “to take advantage of the interesting shape and the movement in the water. The projectors provide carefully shaped beams of light with delicately tinted filter to enhance the night time appearance of the shape and texture of the building.” ‘Surprise pink’ and ‘midnight blue’ colored filters were chosen, supposedly because of their effectiveness in producing other colors in combination with each other while revealing the curves and texture of the building. Unfortunately, the structure that housed the lights was not an elegant design, as seen in the photo below from a newspaper clipping expressing the public’s distain for these lights, describing the structures as ‘chicken coops.’

In 1956, the decision was made to completely fill in the reflecting pool, turning it into a lawn. The absence of the pool significantly changed the entire appearance of the music hall. Ted Lownie, the lead restoration architect for Kleinhans with the firm Hamilton Houston Lownie, said:

“Whoever made the decision to convert the space to a lawn ignored the pool’s important place in Eliel Saarinen’s grand 1940 design.  It completed the great ellipse that this building is.  It not only finished the entire composition but made the transition between the actual building and the natural lawn.”

Some local residents may remember what Kleinhans looked like without the pool. I find it is almost impossible to imagine. What would Kleinhans be without it? Photos of the music hall during this time are rare and hard to come by, maybe for good reason. Below are the only two pieces of documentation that I could find.

In 2001, the pool was redesigned and recreated as part of a larger $12 million dollar restoration project to Kleinhans Music Hall. This is the reflecting pool we all know and love today. The largest difference between this redesigned pool and the original pool from 1940 is, again, the depth. The current pool is even more shallow, at a total depth of 3 inches with a concave floor that gives the appearance of a much greater depth. The water, which is drained in the fall and filled in the spring to avoid freezing and cracking of the foundation, is also dyed black to make the pool appear even deeper, and increases the reflectivity of the building.

The reflecting pool drained for the winter showing the 3-inch depth.

The other noticeable design change from the original pool is the exterior lighting on the façade of the Mary Seaton Room. Instead of the ‘chicken coop’ design, lights were installed within the base of the walkway between the pool and the Mary Seaton Room walls. These lights beam up onto the building, which then are reflected into the pool revealing a stunning sight. Some time after they were first installed, the lights fell into disrepair leaving the majestic hall and its reflecting pool in darkness. However, in March of this year, the lights were once again restored, providing a nightly picture of elegance that can now be experienced from 8 p.m. to 11 p.m.

The walkway lights along the Mary Seaton Room exterior.

Exterior shots of the Mary Seaton Room at night.

The reflecting pool at Kleinhans is a magnificent feature of the building’s exterior design. It is often used as a photo backdrop for the many high school and college graduations that Kleinhans hosts every year, as well as a hotspot for wedding party photos. In the spring, summer, and fall months, people from the neighborhood are always picnicking, gathering, and relaxing by the pool’s edge. It serves as an important feature for the architectural beauty and integrity of the building, but also as a place of refuge for the community.

My favorite feature of the pool? It’s amazingly photogenic! I feel so lucky that this place is my work environment, and I never take it for granted. Through the years, in beautiful and quiet moments, I’ve been lucky enough to snap some great photos. I think the best time of day to take photographs is early in the morning, usually before 10 a.m. in the summer months when the sun is directly hitting the east face of the building (the curved Mary Seaton Room exterior). I used to work for the graduation ceremonies at Kleinhans for a few years, and had to arrive by 6 a.m. most days to prep the building and grounds. The following are some great shots of the pool between 7 a.m. and 9 a.m. in May-June:

My favorite location from which to take photos photos is usually in the absolute center of the pool. When standing on the outer perimeter sidewalk, stand directly in front of the center door and take a few steps back. This works great for panoramic and standard photos. Another location I really like is to stand at the flat base of the pool, by the stairs on either side and put my phone (yes, all photos here are from my iPhone!) on the sidewalk just at the edge of the pool. Pan it up to the building and take a photo like this:

The position of the sun is a huge factor when taking photos of the pool. It amazes me how different the pool and building can look at different times of day. Here’s an image taken in the mid-evening hours. The sun shines on the north side of the Mary Seaton Room:

I’d like to give a ‘shout out’ to the wildlife that visits the reflecting pool regularly. Every spring and throughout the summer, ducks flock to Kleinhans and are often seen sleeping at the edge or wading in the pool in pairs or small groups. In the fall of 2017 when the pool was almost completely drained for the winter, a school of large goldfish were found in the remaining puddles. A miraculous accident of nature? …Probably not.

My hope is that everyone who visits Kleinhans understand just how important the reflecting pool is. If it wasn’t for the restoration efforts by Ted Lownie and others, we might not have this remarkable and beautiful piece of architectural treasure today.

Special thanks to Lauren Becker and Christopher N. Brown for their incredible assistance with collecting historical information for this piece.

Photo Credit: All photos in this blog were taken by the author, Connor Schloop.