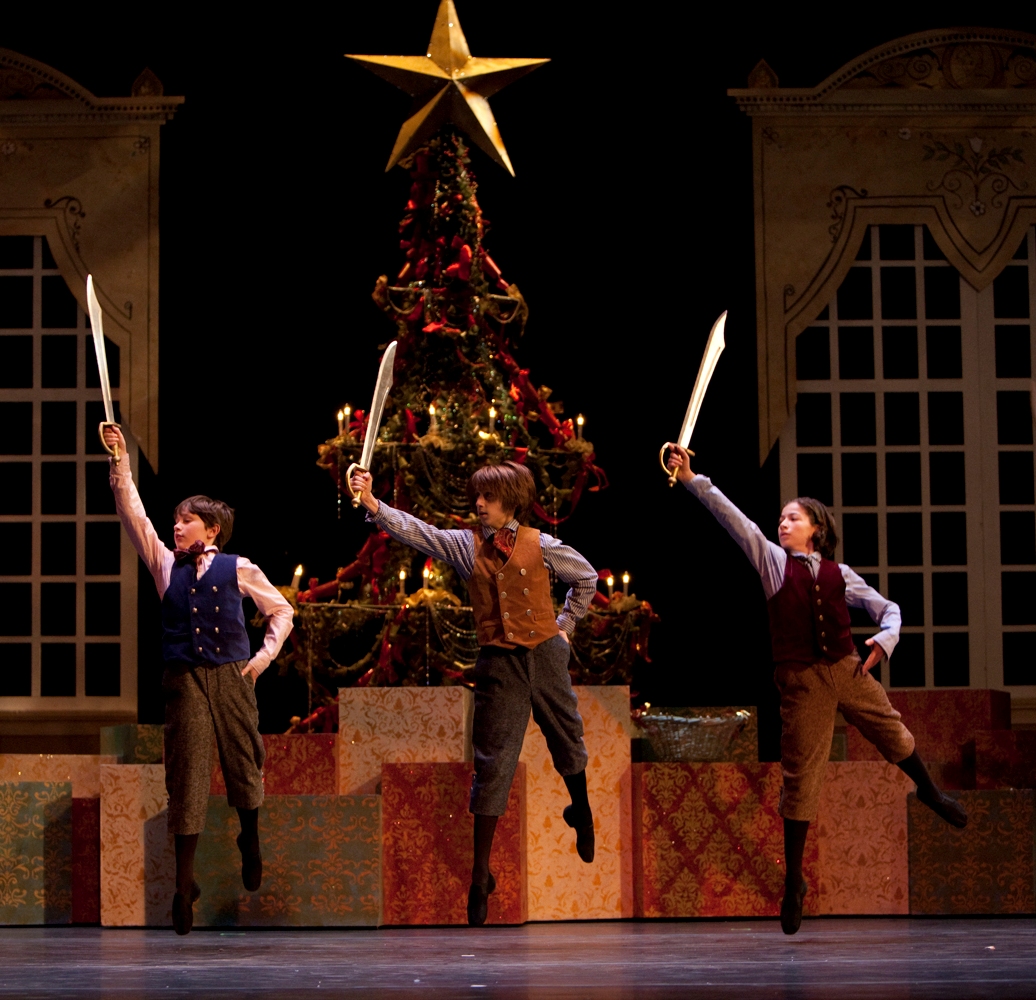 THUMBNAIL SKETCH: Presented on Christmas eve with a nutcracker doll by the mysterious Herr Drosselmeyer, young Marie later dreams that her home has been invaded by rats and mice, only to be saved by the brave nutcracker. As the dream continues, she grows up and the nutcracker is transformed into a handsome cavalier with whom she travels to the land of sweets.

THE PLAYERS, THE PLAY, AND THE PRODUCTION: With many of the roles reprised by the same cast as last year, somehow this year seemed more magical. One difference was the conductor in the pit, the BPO’s new Associate Conductor, Stefan Sanders. Certainly the BPO brought the “A Team” with every section led by its principal player. What I can say for sure is this: at the ending bows Maestro Sanders was led on stage and when he pointed to and applauded his musicians, the audience erupted with cheers. So, I don’t think it was just my impression alone that the music was superb.

Two performances were improved. Japanese exchange student (at Buf Sem) Yuha Tomita was once again Marie, and there’s nothing like experience and another year of dancing to give you confidence. Why did Vincent O’Neill (of the Irish Classical Theatre) improve? I think it’s because he recently starred in “The Would Be Gentleman” at Kleinhans with the BPO playing the music by Richard Strauss. Who can say, but he seemed more of the mysterious magician and less of the doting uncle this year, and it worked.

It was a convention in many early 19th century operas to insert a ballet (or two) in the middle of the action, ballets which had absolutely nothing to do with the opera plot. And, it was the convention of 19th century ballets to provide opportunities to showcase the dancers in solos, pas de deux, trios, and ensembles which also had nothing to do with the plot. I can see a pre-teen dreaming of snowflakes, cupcakes, or flowers but why Spanish, Arabian, Chinese, and Russian dancers? However, we wouldn’t give up the music by Tchaikovsky, so who cares why?

Cool things to mention in the car on the way home: Towards the end of the second act, when the Cavalier moves around the entire stage in a circle, landing on one leg on one leg before spinning, those moves are called “grands jetes en tournant.” During the music for “The Dance of the Sugar Plum Fairy” the instrument that sounds like bells is actually a keyboard instrument called a celeste (say “chuh-LEST”). Marie is danced by a local high school student but so is one of the mirlitons (Benjamin Reading is a senior at City Honors). And what is a “mirliton?” Well, it’s a vegetable used in Cajun cooking, but that’s not what Tchaikovsky was thinking of. A mirliton is also a kazoo like instrument which some people call a “reed flute” and in this ballet, the music is played not by a reed instrument (oboe, English horn, or clarinet) but just by flutes.

We’ve mentioned the dancers and the orchestra, but kudos must go to Shea’s which continues to improve the theater. It’s always a special place, but during the holidays, it also seems to sparkle more.

Rating: FOUR BUFFALOS: Both the production and the play are of high caliber. If the genre/content are up your alley, I would make a real effort to attend.