Maybe it’s not at the geographic center of Poland, but Warsaw is the nation’s capital, its largest and best-known city, and its cultural capital. 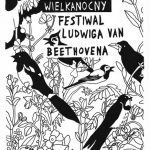 Our stop here is also the centerpiece of our Poland tour. For the past 14 years, Warsaw has been home to the Beethoven Easter Festival, founded and directed by Elzbieta Penderecka. The Festival has a different theme each year, and attracts the world’s top classical musicians. Anne-Sophie Mutter, Yuri Bashmet, Christopher Eschenbach and the Tokoy String Quartet are among the distinguished musicians who have graced the festival in previous years. But until this year, a full American orchestra had never performed at the Festival, nor had an American woman ever conducted at the Festival. We’ll make history on March 20! 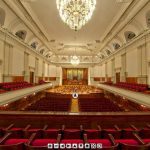 Philharmonia Hall is the only historic venue we will visit on our tour. Originally constructed in 1901, it was rebuilt in 1955 after the hall’s destruction during a World War II air raid. The interior was originally modeled after the Paris Opera, and was re-created, but the exterior of the building matches the modernist style that was popular at the time. The hall is home to the Warsaw National Philharmonic Orchestra, one of Poland’s oldest musical ensembles.

Warsaw itself is full of history: complex, painful, and joyous at the same time. Warsaw bore the brunt of Nazi offensives in World War II, with 85% of the city’s buildings reduced to rubble after the war in a brutal planned destruction and the massacre of hundreds of thousands of its citizens. This violent and tragic history is commemorated throughout the city, in museums, monuments and plaques. But its story is ultimately one of survival and perseverance. When the 14th-century Royal Castle was destroyed at the end of the war, the government rebuilt it, and today it stands as a museum to the glories of Poland’s past. St. John’s Cathedral, a 15th-century construction, was likewise rebuilt, as was the city’s historic Old Town Square. For these efforts, it earned the nickname ‘The Phoenix City.’

Today, it’s considered a city on the rise. Its high-tech Chopin Museum and Neon Museum are popular choices for visitors. It boasts an excellent restaurant scene, and tours telling the complex story of the city are widely available. It is the ninth-most populous city in the EU, with 1.76 million residents in the city and another 3.1 million living in its greater metropolitan area. Warsaw is the seat of Poland’s government, and home to the Warsaw Stock Exchange. Interestingly, one of its major industries is business process outsourcing — which shares an acronym with us!

The Warsaw performance is special to us in many, many ways, but perhaps best of all is the presence of several familiar faces in the audience. Thirty of our fans have signed up to take the VIP Patron Tour and cheer us on at this performance. After a post-concert party, we will part ways for a while: us to Katowice and them to Krakow. We know that we will go forward with a renewed sense of energy to propel us through the rest of the tour, and we hope that our patrons will travel the rest of this beautiful nation with pride, knowing that it is their orchestra who is representing their country here.