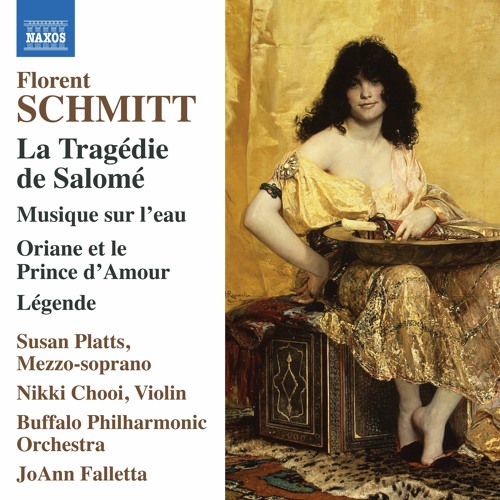 Falletta, who has a world-wide reputation for exploring untrodden musical paths and bringing unknown or little-known works to life, calls Schmitt “The most important French composer you might never have heard of” and praises his style as “startlingly beautiful – passionate, brooding, extravagant and wild!” A student of Massenet and Fauré, and winner of the coveted Prix de Rome, Schmitt’s impressionistic style blends influences ranging from Debussy to Wagner, with reference to Stravinsky and other contemporaries.

In describing the music on this recording, Falletta says “Florent Schmitt seemed fascinated by strong women of questionable virtue, and his The Tragedy of Salome is a masterful retelling of the exotic beauty who dances for Herod and demands the head of John the Baptist as her reward. A stunning moment in the piece which was conceived as a ballet but revised as a symphonic poem is the wordless singing of Salome and her young handmaidens, beautifully realized by mezzo-soprano Susan Platts and the Women’s Choir of Buffalo.

This is passionate and seductive music at its best, and Schmitt creates a landscape that is both sensuous and dangerous. He takes a similar approach with the insatiable Oriane, and the alternation of gorgeous love music and wild orgiastic dances is absolutely thrilling. Susan Platts is also featured in one of the most beautiful orchestral songs ever composed – Musique sur l’eau, a jewel of a composition that rivals the greatest works in that genre. Violinist Nikki Chooi is the radiant soloist in Légende, a brooding and ecstatic rhapsody never before heard in Schmitt’s version for violin and orchestra.”

This is the second album of music of Schmitt by Falletta and the Buffalo Philharmonic. The first, Schmitt: Antoine et Cléopâtre Suites Nos. 1 and 2 / Le Palais Hanté (Naxos 8.573521) received 5 stars from Pizzicato and Classical Music Magazine, was a Music Web International Recording of the Month, and was hailed by Fanfare Magazine saying “Falletta and the Buffalo Philharmonic prove to be a winning combination. She paces the music perfectly… and the orchestral textures are warmly and clearly reproduced.”

Grammy-winning conductor JoAnn Falletta serves as Music Director of the Buffalo Philharmonic Orchestra, and the Connie and Marc Jacobson Music Director Laureate of the Virginia Symphony Orchestra, Principal Guest Conductor of the Brevard Music Center and Artistic Adviser to the Hawaii Symphony Orchestra and the Cleveland Institute of Music Orchestra. As Music Director of the Buffalo Philharmonic, Falletta became the first woman to lead a major America ensemble. Her recent and upcoming North American guest conducting includes the National Symphony, Detroit Symphony, Nashville Symphony, Indianapolis Symphony, and Milwaukee Symphony; and further north, the Toronto Symphony and Orchestre Métropolitain. Internationally, she has conducted many of the most prominent orchestras in Europe, Asia and South America. With a discography of almost 120 titles, Falletta is a leading recording artist for Naxos. In 2019, she won her first individual Grammy Award as conductor of the London Symphony in the Best Classical Compendium category for Spiritualist, her fifth world premiere recording of the music of Kenneth Fuchs. Her Naxos recording of Mr. Tambourine Man: Seven Poems of Bob Dylan received two Grammys in 2008. Recent releases by the BPO for Naxos include the highly acclaimed world premiere recording of Richard Danielpour’s The Passion of Yeshua. Gramophone praised the recording saying “JoAnn Falletta is a forceful champion of the score, which she shapes with sensitive and potent authority” and Records International calls it a “work of glowing spirituality.”

Susan Platts brings a uniquely rich and wide-ranging voice to the concert and recital repertoire and is particularly esteemed for her performances of Mahler’s works. Her previous Naxos recordings include a disc with JoAnn Falletta and the Virginia Arts Festival Chamber Players of Mahler songs arranged by Schoenberg. She is a Rolex Mentor and Protégé Arts Initiative Fellow, which gave her the opportunity to study with Jessye Norman. Platts has performed with, among others, The Philadelphia, Cleveland and Minnesota Orchestras, Orchestre de Paris and the BBC Symphony Orchestra.

Canadian violinist Nikki Chooi has established himself as an artist of rare versatility. Described as “vigorous, colorful” by the New York Times, he has appeared at Chicago’s Harris Theatre, Philadelphia’s Kimmel Center, New York’s Carnegie Hall, as well as on nationwide tours with Musicians from Marlboro. He has performed as soloist with orchestras including the Montréal Symphony, Calgary Philharmonic, the National Arts Centre Orchestra, the St. Petersburg State Orchestra, National Orchestra of Belgium, Malaysian Philharmonic and Hong Kong Philharmonic. Chooi is concertmaster of the Buffalo Philharmonic Orchestra and previously served as concertmaster of the Metropolitan Opera Orchestra.

To purchase this and other BPO recordings, click here.