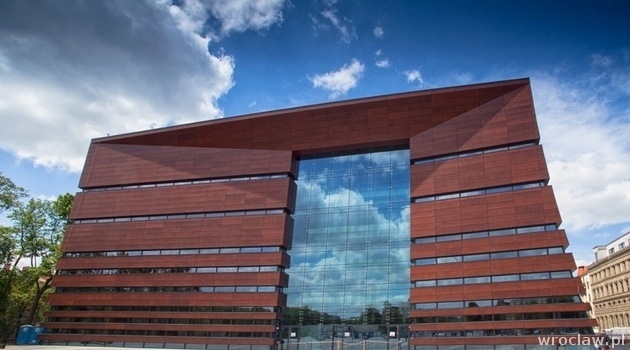 Visit the page for Wroclaw on The Lonely Planet, and you’ll see they call it “a lively idyll.” It’s easy to see why. Poland’s fourth-largest city is nestled on the banks of the River Oder, not far from the Sudeten Mountains. The city is nearly two millenia old, dating from 142-147 AD, and has rich architectural heritage, with Prussian, German, and Austrian influences.

But it’s also a vibrant city, humming with economic activity and alive with a massive student population of more than 130,000. It has a large manufacturing base, an emerging tech sector, and is home to several corporate headquarters. Its cultural sector is equally vibrant: it’s home to the Wroclaw Opera, the National Puppet Theater, and Centennial Hall in addition to the Witold  Lutosławski National Forum of Music, where the full BPO will give its first performance of the tour.

The National Forum of Music was completed in 2015, one of the many postmodern-style venues constructed in Poland in recent years. Named after one of Poland’s most revered composers and conductors, it is home to a variety of musical groups, including the Wrocław Philharmonic, Leopoldinum Orchestra, Polish Cello Quartet, NFM Boys’ Choir, and Lutosławski Quartet.

Poland is a nation that is reinventing itself and moving into a new era. BPO Principal French Horn Jacek Muzyk, a native of Poland, said that his hometown is different every time he visits. The ancient city of Wroclaw is no exception. One of its most popular tourist attractions is a relatively new one: its tiny bronze dwarf statues, approximately 350 of them, scattered throughout the city. The statues commemorate the Orange Alternative movement, an anti-Communist movement which used a dwarf as its symbol. “Hunting for dwarfs” is an excellent way to see a lot of Wroclaw — there’s even an app available to assist in this quest! The city is also known for its excellent restaurants, craft breweries and nightlife. It’s even host to the Festival of Good Beer, the biggest beer festival in Poland. Much to our chagrin, though, the festival doesn’t take place until June.

Wroclaw sounds like an exciting place to explore, and the BPO musicians will have a free day there to do just that.