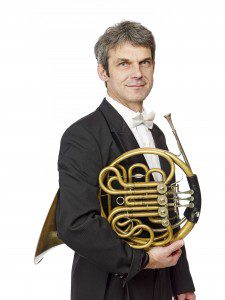 Jacek Muzyk, born in Krakow, Poland, began to study French horn at the age of 18 and graduated with a master's degree from the Academy of Music in Krakow. Muzyk earned his second master's degree at the Mannes College of Music in New York City studying under David Jolley. He continued his education at the Juilliard School of Music under William Purvis and at Rice University in Houston, Texas under William VerMeulen.

Then, Muzyk returned to Poland and worked full time with the best Polish orchestras, including Sinfonia Varsovia, the National Philharmonic of Warsaw, Polish Radio Orchestra, and the Krakow Philharmonic. In 1999, he was nominated the Principal Horn for Krystian Zimerman's Polish Festival Orchestra, the elite group of Poland's finest musicians that toured Europe and the United States with more than 40 performances of Chopin's concertos. The tour won numerous accolades, including a Grammy Award.

In 2002, Muzyk moved to the United States where he played with the Houston Grand Opera and the Dallas Symphony before being appointed the Principal Horn with the Buffalo Philharmonic. He made guest appearances with the Chicago Symphony Orchestra, the Houston Symphony, Pittsburgh Symphony, Saint Louis Symphony, Saint Paul Chamber Orchestra and other orchestras in the USA, Asia, Europe, and South America, often performing as a guest soloist. Muzyk has given numerous master classes and recitals throughout all habitable continents and has made solo recordings under the Polish Radio label.

Currently, there are three CD recordings of Muzyk's performances: Mozart's Concertos (including all concertos); Bach Music for French Horn (Cello Suites No. 1, 2, and 3); and Horn Constellation (French horn played in various configurations from solo and duets with various instruments; Michal Muzyk, Mr. Muzyk's talented young son, plays first horn in a duet with his father in one of the selections). After winning the Associate Principal Horn position with the Houston Symphony and performing there for a year, Mr. Muzyk decided to return to Buffalo and continues as Principal French Horn for the BPO.