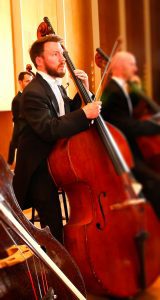 Double Bassist Nicholas Jones began studying violin at an early age in Orchard Park, New York before switching to the Double Bass in high school. Before joining the Buffalo Philharmonic in 2017, Nicholas performed regularly with many ensembles including the Pittsburgh Symphony, Orpheus Chamber Orchestra, Baltimore Symphony, and Rochester Philharmonic. Nicholas has performed throughout North America, Europe, and Asia as a member of the National Orchestral Institute, Lucerne Festival Academy, and Pacific Music Festival. A graduate of the Peabody Conservatory of Music, where he studied with Paul Johnson, Nicholas went on to study with Jeffrey Turner at Carnegie Mellon University, and Donald Palma at the Yale University School of Music. Nicholas served as a graduate assistant while at Carnegie Mellon University, and as a Double Bass instructor for Yale University undergraduates. He currently lives in Elmwood Village with his wife Mari, a violinist, and their cat Moon.