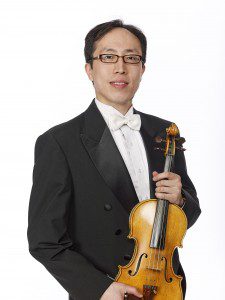 Shieh-Jian Tsai was born in Taipei, Taiwan. He began playing the violin at age 6, and attended music schools in Taipei until 1991, when he immigrated to the US with his family. Shieh-Jian received his Bachelor of Music degree from the University of Illinois, Urbana-Champaign, and Master of Music degree from New England Conservatory in Boston, MA. His principle teachers include Mr. Gerardo Ribeiro, Mr. Sherban Lupu, and Ms. Masuko Ushioda. Shieh-Jian has been a participant of Musicorda, Tanglewood, and Sarasota Music Festivals, where he learned from great musicians such as Ronald Copes, Pamela Frank, Emanual Ax, and Arnold Steinhardt, and performed orchestral and chamber music with colleagues from around the country. As a member of the Nuance Chamber Ensemble, he has performed regularly in concert halls in Taiwan and at the Weill Recital Hall at Carnegie Hall. He has also been a soloist with the Taiwan Strings Orchestra after winning their 5th violin concerto competition in 2004. Most recently, he was invited on European and South American tour with the Verbier Festival Orchestra under direction of Maestro Jiri Belohlavek and pianist Yundi Lee and Lang Lang. Shieh-Jian performs frequently with the Buffalo Chamber Players and is currently in the second violin section of the Buffalo Philharmonic Orchestra.