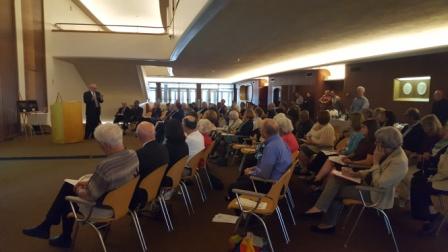 The Buffalo Philharmonic Orchestra has struck a chord both artistically and financially with its supporters.

In its just-completed fiscal year, the orchestra saw attendance increase by more than 11.5 percent to a record 212,114 people attending at least one of its 129 performances. Financially, the BPO finished slightly in the black.

“It was a fantastic year for so many reasons,” said Dan Hart, executive director.

The orchestra finished its 2016-2017 fiscal year, which ended on Aug. 31, with $11.6 million in revenues and almost the same amount in expenses.

“We finished with a very slight surplus,” said Stephen Smith, chairman of the Buffalo Philharmonic Orchestra Society board of trustees.

Including revenues, endowment, pledges and assets from its ongoing Crescendo fund raising campaign, the orchestra has approximately $40 million in assets and on its way to reaching a $50 million in total assets goal — roughly five times its annual budget.

“We’re well on our way,” said James Beardi, board of trustees treasurer. “We continue to manage our expenses well.”

Smith said the board’s goal continues to focus on growing the orchestra’s audience, “developing and growing artistically” and operate in a fiscally responsible manner.

The orchestra generated $4.3 million, which accounted for 37 percent of its $11.6 million total revenues. Earned revenue topped off at $4.4 million, or 38 percent, of the total revenue.

Government and public contributions accounted for $1.15 million, or 10 percent, of the orchestra’s revenues while endowment income was $1.75 million, or 15 percent of the total 2016-2017 revenues.

On the expense side, the largest was $7.2 million allocated for paying the orchestra, its guest artists and visiting conductors. That accounted for 62 percent of the orchestra’s $11.6 million in expenses.

Of its 129 performances, spread over a negotiated 38-week season with the musicians, 38 were traditional classics concerts, 26 were rock or Pops series shows, six were family concerts, 32 were education programs for school children from kindergarten to high schoolers and 12 each with summer or “tour” concerts.

The classics attracted 45,617 music lovers while the rock or Pops concerts drew 43,125 patrons.

“Consider in 2004, we had just 14,000 students attend one of those shows, it demonstrates how we’ve grown with our outreach,” Hart said.

The summer shows attracted 55,335 including large crowds at a June 30 Canalside show and the July 28 “Enlighten” concert at the Hotel Henry.

“Taken together, it shows how we continue to evolve and play an important role in the community,” Hart said.