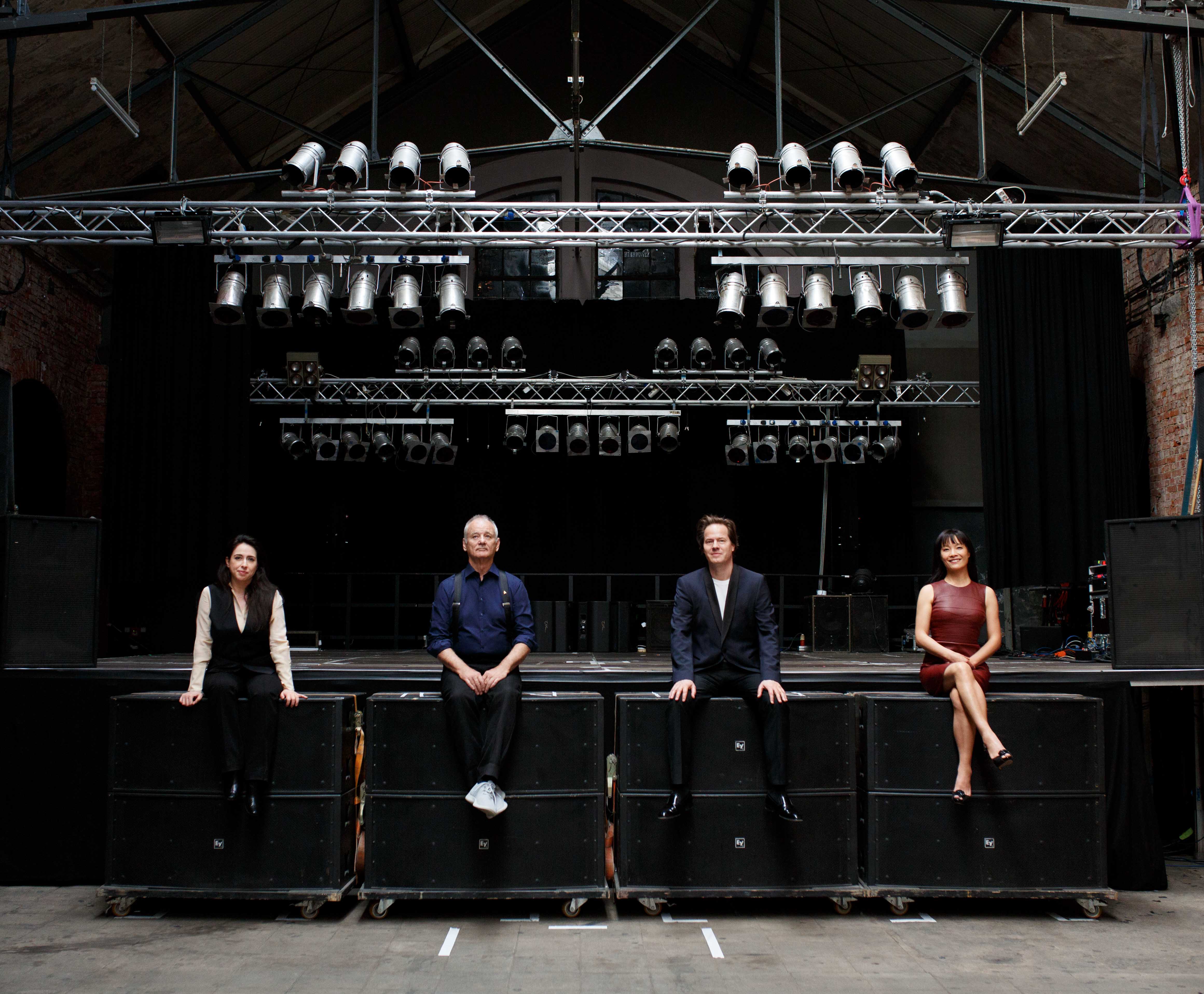 The tour started in California and on Monday it’s off to Carnegie Hall, but this Wednesday night, while outside the wind blew and the rain fell, inside Kleinhans Music Hall, for over two hours without a break, including five encore pieces, Bill Murray was all ours and we were all his.

Looking up the word “entranced” gives the synonyms: captivated, engrossed, fascinated, charmed, delighted, enthralled, spellbound, mesmerized, enchanted, and riveted. Yes, we were. With wild applause, peals of laughter, but mostly moments where you could hear a pin drop, the almost 2,400 faithful and those about to be converted were in the hands of a master.

So what was this event, anyway? Booked by the Buffalo Philharmonic, it was a meeting of old world, European classical music, where a trio of piano, violin, and cello played Bach, Schubert, Ravel, Saint-Saens, and Shostakovich along with some new world, American music, and a selection of readings of American literature mostly dealing with the “outsider” coming to terms with his life.

This examination of “the stranger” was prime Bill Murray real estate, the very essence of a comedian and performer who all his life has been “a little off” of the mainstream – the uninvited, seemingly clueless or rude guest who makes us question our own values and attitudes. And that was the thread that connected all the readings and songs. For the record, Murray is not a traditional singer-actor-dancer, but he does all those things, and more, and because it’s so honest, it all works. All of it. Even his singing Maria’s song “I Feel Pretty.” Really. You had to be there.

He is one hell of a reader, though.

The readings started with an interview of the American ex-patriot writer Ernest Hemingway trying to be Parisian, then went on to poetry by Walt Whitman, who asked uncomfortable questions of America and was often rebuked, and on to a reading from James Fenimore Cooper’s The Deerslayer, a novel about the white man, Natty Bumpo, who had “gone native” and was now about to kill a man to aid his Indian friend. The emotional high point of the evening came with a reading from Mark Twain’s Adventures of Huckleberry Finn in which Huck must decide whether to be “white” and turn his friend Jim over to the slave hunters, or whether to commit the “sin” of helping “steal” a white slave owner’s “property.” Using a variety of voices to become Huck, Jim, and the two slave hunters, it was a moment. After the concert we hoped that someone had taken Bill Murray over to the downtown Central Library, which houses the original manuscript of Huck Finn, considered the first great American novel. I think he would have liked that.

And, Murray knew his audience, getting one of the biggest cheers when singing “America” from Leonard Bernstein and Stephen Sondheim’s 1956 West Side Story which includes the lines: “Nobody knows in America / Puerto Rico’s in America!” still very topical after 60 years.

It’s the mark of a great performer to surround him or herself with others of equal talent.

It’s the mark of a great performer to surround him or herself with others of equal talent, and Bill had assembled what for classical audiences was an all-star team playing two multi-million-dollar Stradivari instruments: violinist Mira Wang and cellist Jan Vogler with Vanessa Perez at the Steinway piano.

Was the venue part of the evening? You bet. Kleinhans vaunted acoustics were a “fourth man” in this event. Murray was mic’d, but the three musicians were not, adding to the intimacy of the evening. I found it interesting that on Tuesday, the venue hosted Grammy Award winning classical chamber music superstars, the Takacs string quartet (all chamber music) and tonight, Thursday, the literary BABEL series hosts a conversation with environmental author and activist Terry Tempest Williams (all literary talk) and in between Bill Murray brought those two worlds together – music and literature – seamlessly.

While that expression “it’s hard to explain; you had to be there” applies, there is a CD of the tour available.

Next up is a “BPO Rocks!” event: “Just Imagine – A Tribute to John Lennon” Friday, October 13 at 8:00 p.m. And on Saturday, as part of Hispanic Heritage Month, the BPO’s KeyBank Pops Series presents The Mambo Kings. Then it’s back to classical music, mostly, with the M&T Bank Classics concert “Russian Fantasy” featuring music by Borodin and Prokofiev and in-between, five-time Grammy-winning electric bassist Victor Wooten joins the orchestra for a performance of “The Bass Whisperer.”