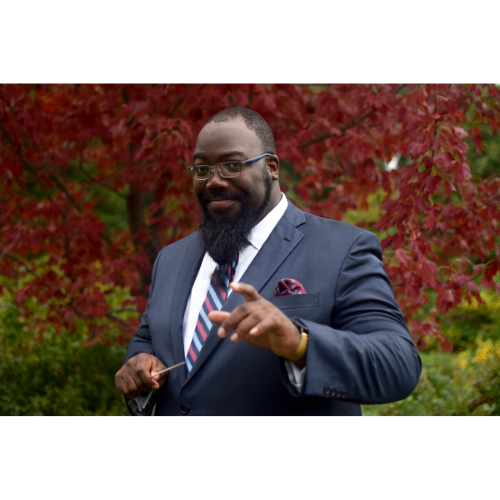 BUFFALO, NY – Jaman Edward Dunn will become the first-ever Assistant Conductor,
Community Engagement of the Buffalo Philharmonic Orchestra, starting later this month.
The one-year Assistant Conductor position was funded by Round VII of the New York
State Council on the Arts Regional Economic Development Council initiative and is part
of the BPO’s ongoing efforts to engage with all parts of the Buffalo community in a
meaningful way and to serve diverse audiences.

Dunn was selected from a slate of six candidates who came to Buffalo from as far away
as Germany and Argentina for a closed conducting audition. Each candidate had an
opportunity to conduct the orchestra, deliver a speaking presentation to members of the
orchestra, board and community, and take part in an interview process.
Dunn will lead the May 2019 Side-By-Side concert with the Buffalo Academy for Visual
and Performing Arts, which includes not only the music students performing onstage
with the BPO, but dance, theatrical and visual elements put together by students in the
other programs. He will also take part in the Music for Youth education concert series,
BPO Kids concerts, school outreach, cover conducting duties and will participate in the
BPO Diversity Council.

Dunn has been studying conducting since high school. A Chicago native, he began his
musical education as a violinist at the age of 8. He attended The Ohio State University
for vocal performance, where he founded the Buckeye Philharmonic, which remains
Ohio State’s only student-run and operated orchestra. He is a recent graduate of The
Boston Conservatory at Berklee with a Master’s of Music degree in conducting.
During his studies, he led the Conductor’s Orchestra at Berklee in works of Strauss,
Brahms, Walton, and Dvořák; and he has assisted the Boston Conservatory Orchestra in
works of Mahler, Shostakovich, and Prokofiev. Separate from his program requirements,
Dunn has conducted self-promoted concerts of Vaughan Williams, Respighi, John
Williams, Mendelssohn, and Elgar. Maestro Dunn has also conducted the Berklee
Boston Conservatory Recording Orchestra in compositions by rising composers in the
fields of classical and film music. He balances this with a continued career as a vocalist.

“I am extremely excited to be appointed to this position with the Buffalo Philharmonic
Orchestra,” Dunn said. “I am very passionate about conducting, but even more than
that, I am very passionate about the presence of minorities in classical music. One of the
biggest challenges I have experienced is the underrepresentation of African-American
role models in this field. I hope that with this position, I can add to the presence of
African-American conductors in the performance field in order to make visibility that
much stronger. I can’t wait to begin this journey with the Buffalo Philharmonic.”

About the BPO
As Buffalo’s cultural ambassador, the Grammy Award-winning Buffalo Philharmonic Orchestra under
the leadership of music director JoAnn Falletta presents more than 100 concerts each year. Since 1940,
the orchestra’s home has been Kleinhans Music Hall, a National Historic Landmark with a reputation as
one of the finest concert halls in the United States. During the tenure of JoAnn Falletta, the BPO has
rekindled its history of radio broadcasts and recordings, including the release of 45 new recordings on
the Naxos and Beau Fleuve labels.